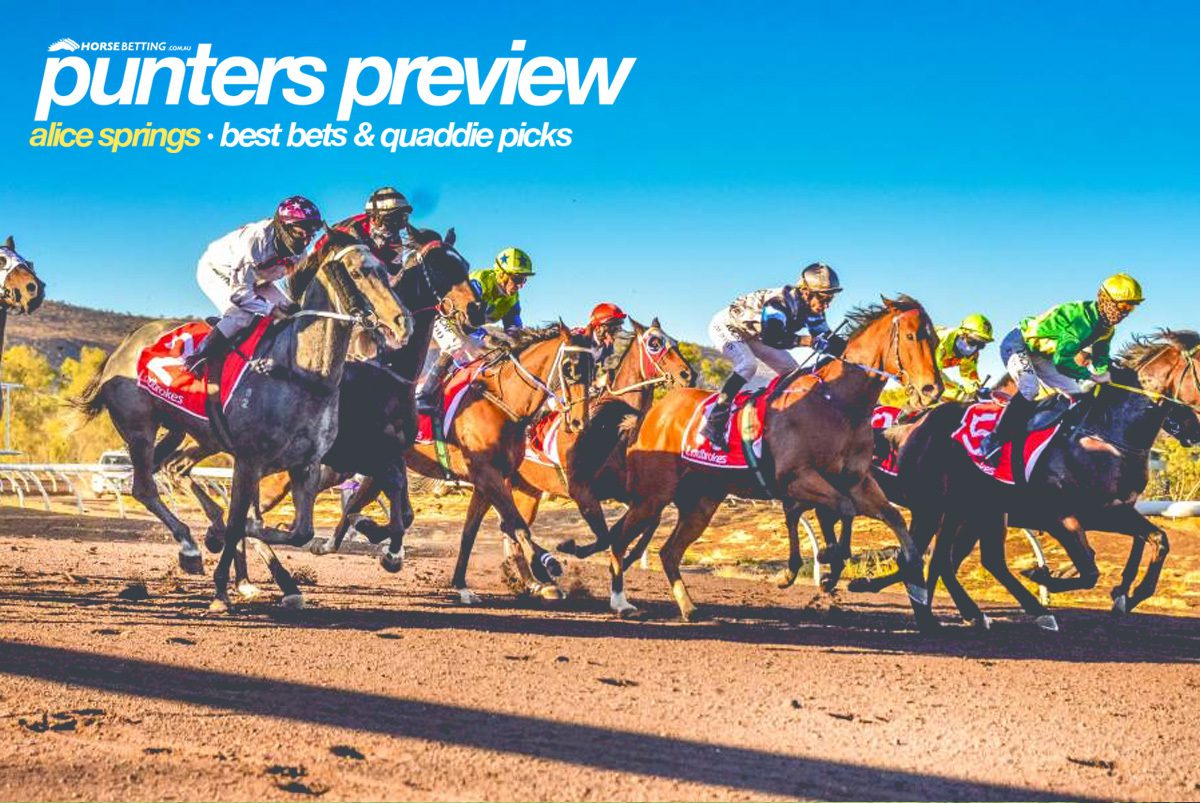 Two narrow seconds in her past two starts suggests that the five-year-old grey mare is on the verge of making it third time lucky on this occasion. Celine is making the step up to 1600m for the first time after recent runs over 1400m at a 0-64 and 0-66 level on March 20 and April 9. Elon (Phil Cole/Wayne Davis), Shame Shame Shame (Kym Healy/Sairyn Fawke) and Oddsock (Trevor Montgomerie/Michael Heagney) should be more than competitive. Envy Me (Lisa Whittle/Paul Denton) is not out of it, but may battle to get the trip. In the end, it might well be the survival of the fittest as 1600m in Alice Springs can be brutal.

An outstanding eight length winner of the NT Guineas (1600m) on April 16, but Flying Start is going to have his hands full dealing with the highly impressive Bench Press (Terry Gillett/Stan Tsaikos). Flying Start produced a sizzling final 700m in the Guineas to burst from the back of the pack to decimate his fellow three-year-olds. Bench Press has finished first four times and second twice in his past six starts, and although he only spots Flying Start 2.5kg the four-year-old is stepping up to 1600m for the first time since July last year. Bartolini (Phil Cole/Wayne Davis) is the best of the rest in a race with five starters.

A fourth on March 12 over 1100m (0-54) after a spell was followed by a narrow second on April 9 over 1200m (0-58) behind Kyd Rock, who has had his fair share of wins in Alice Springs. The locally trained eight-year-old gelding Rhythmical boasts 13 placings in 26 starts at Pioneer Park, including seven wins. A 3kg claim also enhances Rhythmical’s prospects. Butterfingers (Terry Gillett/Stan Tsaikos) cannot be ignored, while Me Cabo (Greg Connor/Jarrod Todd), Qualis (Sheila Arnold/Paul Shiers) and Kym Healy stablemates Caitlin’s Angel (Sairyn Fawke) and Real Valentia (Wayne Davis) can strike in a very open contest.

The feature race for fillies and mares during the Alice Springs Cup Carnival has attracted a top field with a host of chances. Cut It Out gets the verdict after a narrow second behind Phil Cole’s Mini Boom in 0-70 class over 1200m for the fillies and mares. The four-year-old mare from Victoria drops 3kg following that race a fortnight ago. Mini Boom is in the race up to her ears. Addictions (Trevor Montgomerie/Michael Heagney) was second to the handy Supreme Times in open company over 1100m last start, but lumps an extra 5.5kg on this occasion. Thunder Peak (Gary Clarke/Jarrod Todd) brings good form from Darwin and City Jet (Trevor Montgomerie/Jessie Philpot) has been super competitive since arriving in Alice.

Might be best to take the each-way option. Interstate raiders racing for the first time in the Red Centre against Alice Springs-based opposition also makes it tough to separate the field. Starlite Rebel has produced the goods in Adelaide, so just gets the nod. Ananagram (Lisa Whittle/Lorelle Crow) and Toguchi (Kevin Lamprecht/Sonja Wiseman) have arrived from NSW. Redenzo Lad (Will Savage/Casey Hunter) finished third in 0-62 class (1000m) last start and will fly the flag for the locals along with Gabriana (Terry Gillett/Stan Tsaikos), Iamelle (Russell Bell/Ianish Luximon) and Tycoons Dior (Rene Taylor/Paul Denton).