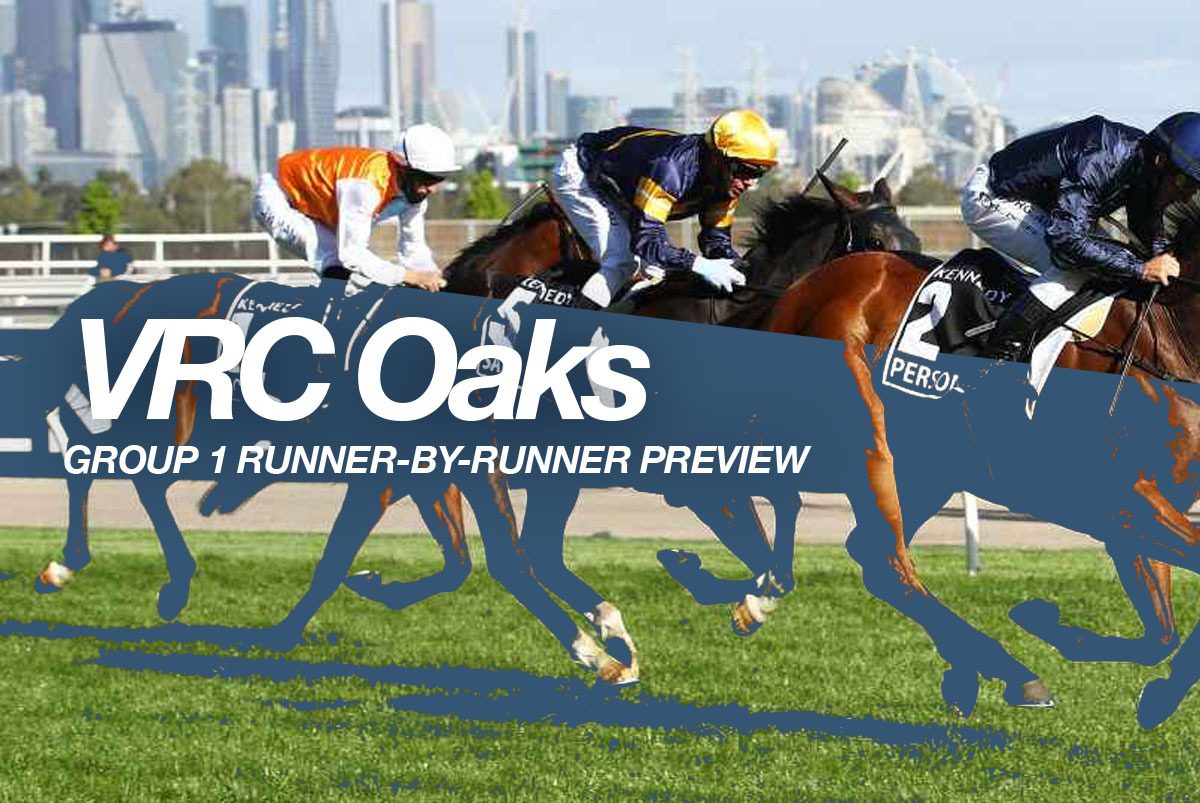 The Group 1 VRC Oaks is one of the biggest races in the Melbourne Spring Carnival and is set to be run at Flemington on Thursday afternoon. Horsebetting’s Victorian form analyst presents his runner-by-runner preview, top selections and betting strategy for the $1,000,000 race at set weights over 2500m for the three-year-old fillies.

3yo F | T: Anthony & Sam Freedman | J: Jye McNeil (56kg)
The Anthony & Sam Freedman-trained Elusive Express is a deserving favourite for the 2021 VRC Oaks. The Jakkalberry filly brings genuine Group 1 form having run second to Yearning in the Thousand Guineas, beaten by a length. She managed to hit the front in the final 200m, but with 100m to go she simply could not match the momentum that Yearning had built up from the rear of the field. Elusive Express did manage to defeat Yearning when they met in the Group 2 Edward Manifold Stakes the start prior and if she brings that type of proven Group 1 form to the Oaks, she looks to have a touch of class on her side.

3yo F | T: Damien Oliver | J: Damien Oliver (56kg)
Despite the proven form of Elusive Express, we have sided with the winner of Saturday’s Gorup 2 Wakeful Stakes, Willowy. The proven combination of James Cummings and Damien Oliver will be hoping to bring up a second Group 1 win with three-year-olds together this Spring Carnival with this Kermadec filly. Having come out of a dominant Newcastle maiden win on October 12, Willowy came out and rocketed herself into Oaks calculations when unleashing a barnstorming turn of foot to finish over the top of Daisies and Douceur who she meets here once again. If she brings a similar effort to the Group 1 on Thursday, we expect Ollie will have her fighting out the finish and bring up back-to-back VRC Oaks wins as a jockey.

3yo F | T: Mick Price & Michael Kent Jr | J: James McDonald (56kg)
Having taken out the Group 3 Ethereal Stakes two starts back, the Mick Price & Michael Kent Jr-trained Daisies was a tough beat in Saturday’s Wakeful Stakes. Having hit the front inside the final 100m, she was eventually reeled in by eventual winner Willowy, in a case where she just ran into one better on the day. With the top three in saddle cloth order, the clear top three selections in betting markets, there does not look to be too much separating them on form. Daisies looks likes she will appreciate the step up to 2500m and with James McDonald riding in A-grade form this week, who is to say she cannot go on to claim the Oaks?

3yo F | T: Ciaron Maher & David Eustace | J: Hugh Bowman (56kg)
The one we think the market has got a touch wrong is the Ciaron Maher & David Eustace-trained Biscayne Bay. Having only won races at 1300m & 1400m in her career, it is tough to line up her form to suggest she will see out a tough 2500m affair. She hardly was an eye-catching run into third when chasing home Daisies in the Ethereal Stakes when beaten three-lengths and looks like she will struggle to turn the tables on her rival. The one thing she has in her favour is you cannot simply rule out a Maher & Eustace runner competing in an event over 2500m. A win would surprise, but a minor placing would not.

3yo F | T: Robbie Griffiths & Mathew de Kock | J: Dean Yendall (56kg)
Having been beaten a combined 27-lengths in two starts this campaign, Gonnadancealot is a deserving $101 chance in the Oaks. It would be one of the biggest form reversals in Group 1 history in the country if she got up and won.

3yo F | T: Patrick Payne | J: Michael Dee (56kg)
Despite the top three in the market looking to have a class edge on the rest of the field, the one we are giving a chance at an each-way price is the Patrick Payne-trained Doceur. She was a good thing beaten two runs back at Caulfield on October 13, before coming out and finish third in the Wakeful Stakes, beaten 1.25-lengths. She is currently a $16 chance with online bookmakers and having only been beaten by just over a length she looks to be over the odds compared to a runner like Biscayne Bay. From barrier 11, she will roll forward and look to settle up on speed and if she can see out 2500m, we expect she will give you a good run for your money at that price.

3yo F | T: Trent Busuttin & Natalie Young | J: Nash Rawiller (56kg)
Despite still being a maiden after four career starts, the Trent Busuttin & Natalie Young-trained Glint Of Hope simply does not know how to run a poor race. Having filled the minor placings in each of her four career starts, she has to be given some chance in Thursday’s Oaks. She chased home Elusive Express and subsequent Group 1 winner Yearning two starts back in the Edward Manifold Stakes when finishing third, then backed it up with a second-place effort behind Daisies in the Ethereal Stakes. She is set to gain a suck run from barrier one and with Nash Rawiller on board, you know he will have her in the right spot throughout, it will all depend if she is good enough on the day. Include in wider exotics and watch for any betting moves on the day.

3yo F | T: Robbie Griffiths & Mathew de Kock | J: Luke Currie (56kg)
Despite being a $21 chance with online bookmakers, we are struggling to find a reason to back Tiz My Bay in the Oaks. She has chased home some of her main rivals here in her last two starts, beaten pretty convincingly in both of those efforts. We’re giving her more of a chance than her stablemate Gonnadancealot, but we do not expect to see Tiz My Bay cross the line in the first four.

3yo F | T: Danny O’Brien | J: Damian Lane (56kg)
Another maiden heading into the VRC Oaks is Blackcomb from the Danny O’Brien yard and despite being a good thing beaten in the Hill Smith Stakes at Morphettville two starts back, she looks like she may struggle here. The Vancouver filly was defeated convincingly in the Moonee Valley Vase and looks like she may struggle to see out the 2500m here. There’s a maiden win out there for her, just not in the Oaks on Thursday.

3yo F | T: Ken & Kasey Keys | J: Craig Newitt (56kg)
If the Ken & Kasey Keys-trained Fabiola manages to win the Oaks and you are on her, you deserve the massive collect. She is coming out of a low rating maiden at Benalla on October 25 and considering she struggled massively behind Blackcomb and Ti My Bay earlier in her campaign, we simply cannot have her here.

3yo F | T: Simon Ryan | J: Declan Bates (56kg)
The Simon Ryan-trained Morrissette comes to the VRC Oaks on the back of an average effort in the Ethereal Stakes when finishing fourth behind Daisies beaten 3.5-lengths. She has just one minor placing from five career starts and despite not finishing worse than fourth in her five starts, she is one we are happy to let go around without our hard earned.

It may not be one of the deepest VRC Oaks fields in history, but the top three in the market suggest we should be in for a cracking edition either way. We have settled on the James Cummings-trained Willowy having won Saturday’s Wakeful Stakes in impressive fashion. The Kermadec filly showed she can see out a genuinely run 2000m affair and looks perfectly suited to handle the step up to 2500m with great aplomb. Daisies and Elusive Expressive will be hitting the line nicely as well, but we simply cannot ignore the way Willowy dismantled her rivals on Saturday and as long as she handles the quick back-up we expect her to be the 2021 VRC Oaks winner.