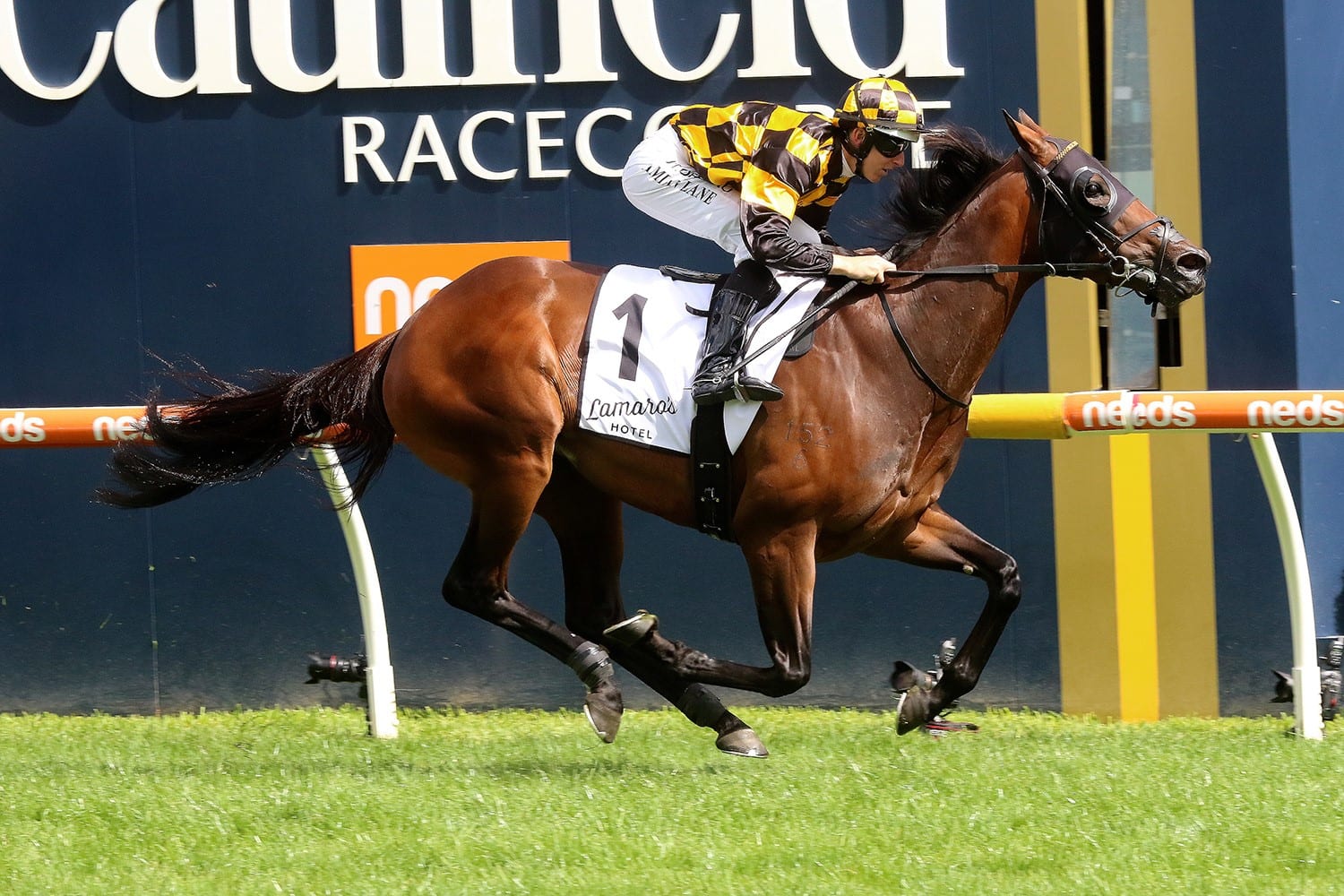 The long-awaited 2021 All Star Mile will be run and won at Moonee Valley on Saturday afternoon. In a field that boasts a combined 18 Group 1 victories, the 15 horses chosen by the public and Racing Victoria will ensure this is one of the racing events of the year. With a third of the field coming through the Futurity Stakes at Caulfield on February 20, there is a strong form race to refer back to. Mystic Journey took out the inaugural All Star Mile in 2019, while Regal Power it at Caulfield in 2020. Who will be next?

Despite a disappointing run in the CF Orr Stakes, it would take a brave man to rule out the 2020 Cox Plate winner on his return to Moonee Valley. If it rains as expected on Saturday, the conditions could play into Sir Dragonet’s favour, but if we remain on a Good 4 or even get an upgrade to a Good 3, we may see connections scratch the champion stallion. From barrier nine, expect John Allen to settle the Maher & Eustace star towards the rear of the field behind what promises to be a genuine tempo.

One of the revelations of last spring was the emergence of Behemoth as a genuine star of the Australian racing scene. He returned with a soft victory at Morphettville to begin his campaign on January 30, but then we were left with a few questions after his fourth-place finish in the Futurity Stakes. He needs to make up three lengths on Probabeel and Arcadia Queen, and from barrier one he will need plenty of luck at a crucial time. But if there is a jockey to get him out of that awkward gate, it is Craig Williams. Willow will look to settle him just off the leaders’ heels, but if he gets trapped three back on the fence or worse in the running, it could be too big a task. There is no doubting his class, but with plenty of luck required, he is one for the wider exotics.

The CF Orr Stakes winner two starts back was well beaten at Caulfield in the Futurity Stakes last time out when racing up on speed. Stepping up to the mile has always been a bit of a challenge for the Shane Nichols-trained gelding, and with his only placing in a race at 1600m coming back in 2018, you would expect this would be a step too far on distance alone. Streets Of Avalon finished 12th in this race last year and could be headed towards a similar result this time around, but his form this campaign suggests he could spring a surprise. The positive coming into the race is his record around The Valley, where he has been in the money five times from seven runs with two wins. He needs it bone dry, however, and the wide gate makes him hard to entertain.

It was a fantastic first-up run in the Futurity Stakes that put Mr Quickie into the calculations for the All Star Mile. With odds of $21 available, the two-time Group 1 winner looms as one of the most intriguing outsiders. From barrier 13, the Phillip Stokes-trained gelding will need a bit of luck early on before settling in the second half of the field. If he can reproduce the turn of foot he showed at Caulfield three weeks back, then under riding for Jamie Kah he looks to be one of the better each-way chances in the All Star Mile. Since April 2019, Mr Quickie has finished no better than seventh when second up from a spell, but the first-up run in the Futurity Stakes is hard to ignore.

The lone Chris Waller runner in the race, Star Of The Seas received a golden ticket into the All Star Mile after taking out the Blamey Stakes on February 27 at Flemington. The gelding had been well backed on that day and savaged the line to record an impressive win over the top of Fifty Stars and Buffalo River. His versatility on both rain-affected going and firm ground shows he is a true classy runner and deserves his spot in the All Star Mile. This will be his first run at Moonee Valley and only his third in Victoria, but his effort in the Blamey Stakes suggests he is a genuine winning chance and must be included in all exotics.

The Kris Lees-trained Mugatoo was beaten close to 3.5 lengths upon resumption in the Group 2 Apollo Stakes at Randwick behind a trio of classy runners. The in-form Hugh Bowman hops back on board for just the second time, which is ominous given their only other ride together resulted in a win. Returning to The Valley, where he was arguably the run of the race in last year’s Cox Plate when finishing fourth after being trapped three wide, we expect him to fight out the finish with the likes of Probabeel and Arcadia Queen.

The Harrovian was always going to be guaranteed a spot in the 2021 All Star Mile on the back of 11 wins in a row in Queensland. His run at Flemington a fortnight ago in the Shaftesbury Avenue suggests he will need to improve rapidly, so it is no surprise to see him priced as a rank outsider at $51. Running in the All Star Mile will arguably be a career high, but he will struggle to beat most of these home.

From one runner with a big following to another, Regalo Di Gaetano only got into this race on the back of huge support from the Italian community in South Australia. On racing efforts alone, he struggles to get within six lengths of most of these. Odds of $201 seems appropriate for the Richard & Chantelle Jolly runner.

The All Star Mile marks the return of the spruik horse of last year, Russian Camelot. He was touted as the next best thing in Australian racing, and he still may be that, but he needs to be ready to go first up in the All Star Mile. The last time we saw him was when he finished eighth in the Melbourne Cup last year, and it will take a bit training effort from Danny O’Brien to have him firing at Moonee Valley this weekend. There is no doubt about the class this horse possesses, and we expect to see him fighting out the finish under Damien Oliver, but he will need to be at his very best to win this first up.

When the barrier draw was held and William Pike drew gate five, it was no surprise to see Arcadia Queen hold outright favouritism in the 2021 All Star Mile betting markets. Expect the Wizard of the West to settle her in a perfect position with a bit of speed draw underneath her. Her return in the Futurity Stakes showed she will be hard to beat, while she is bombproof over the mile with two wins from two starts at 1600m. The three-time Group 1 winner will look to get a bit more luck than her only try around The Valley in last year’s Cox Plate, where she nearly fell at the 1000m mark yet balanced up again to finish four lengths off Sir Dragonet. She is the one to beat in the All Star Mile but is also a runner who improves with a couple of runs under her belt. If she was coming into this third or fourth up, we would be all over her, but she is still a genuine winning chance.

Winning form is good form, and Probabeel’s win in the Futurity Stakes shows there is still a bit of improvement to come from the New Zealand mare. All the talk after the Futurity was the run of Arcadia Queen, but the way Probabeel charged to the lead over the final furlong shows she is the one we want to be with in the All Star Mile. Having also won the Geoffrey Bellmaine Stakes first up with a tough run, we expect her to make it a hat-trick of wins with a victory at The Valley this weekend. No doubt she will need a bit of luck from barrier 10, but the in-form Damian Lane will give her every chance.

With $21 available, the Waterhouse & Bott-trained Shout The Bar looks to be under the odds in the All Star Mile. Without a doubt she will be up on speed and looking to dictate the running in this year’s race. Coming off the back of a third-place finish in the Tressady Stakes a fortnight ago when trapped three wide the trip, she will be rock-hard fit and ready to go. The four-year-old mare will make sure this is a genuinely run mile, but she will need to get a fair jump on her rivals to have any chance of winning.

From barrier 11, expect Greysful Glamour to be racing on the outside of Shout The Bar. Jye McNeil hops on board and may push the mare to the front in a bid to dictate terms. We all know how good McNeil’s Melbourne Cup-winning ride was on Twilight Payment, and he will need to be at his best if Greysful Glamour is to be any hope. She is another who will need it to be bone dry to nave any hope at all.

The Tasmanian cult hero Still A Star comes across Bass Strait for the first time in her career, and this is easily her toughest challenge to date. Having yet to finish worse than second in any of her 13 career starts, there is no questioning her abilities, but odds of $51 seem appropriate for a horse who has never raced at this level.

The only emergency who has any hope of gaining a start in the All Star Mile is the Dabernig & Hayes-trained Fifty Stars. If the potential of a Good 3 surface is declared on race day, expect Sir Dragonet to be scratched and Fifty Stars to come in. Despite finishing 10th in the Australian Cup, he was only beaten by 2.5 lengths and will be there or thereabouts if he runs. He may not be a winning chance but will certainly run a bold race at a price.

Will struggle to get a run, needing two scratchings to even get a start.

Next to no chance of gaining a start.

We have more chance of gaining a start.