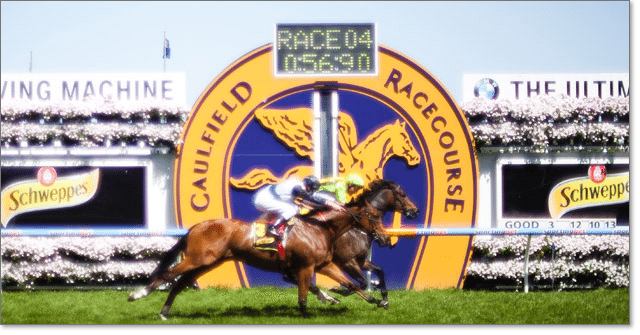 A TOTAL of 22 acceptances (four emergencies) have been confirmed for the 2015 Caulfield Cup this Saturday and the barriers have been drawn.

Missing out on a starting birth was international raider Quest For More, Godolphin’s Complacent, Dibayani and the highly-regarded Magic Hurricane.

2014 Melbourne Cup winner Protectionist have gained top-weight status along with Snow Sky on 58kg. The Sir Michael Stoute-trained Snow Sky has been well favoured in the betting with Damien Oliver in the saddle and a good barrier of 3.

There are five New Zealand or former New Zealand-trained runners in the field, which have been dealt different fates in the barrier draw.

The Chris Waller-trained Who Shot Thebarman has been given barrier 21, but for the many punters which were confident about a good showing, it will likely drop back from the draw regardless.

Current favourite Mongolian Khan drew fairly in barrier nine with Opie Bosson in the saddle. The Murray Baker-trained runner ran a slashing third behind Criterion last Saturday and it looks set to make a splash this spring.

Volkstok’n’barrell hasn’t quite shown up this season and has drawn barrier 11, with Lucia Valentina (20) and Rising Romance (2) getting vastly different outcomes.

Chris Waller is no stranger to having multiple runners in group one races and this Saturday he has three chances in the $3 million Group 1 Caulfield Cup.

Royal Descent, Grand Marshal and Who Shot Thebarman all worked well on Tuesday morning with Royal Descent running 1200 metres in 1:22.97 – the last 400 metres in 25.34 seconds.

Waller has happy with all three of his runners, stating that Royal Descent looked impressive heading into the 2400-metre feature.

“Their work is basically done now, it was just maintenance gallops,” Waller said. “I don’t even time their gallops, I like to just keep a good eye on them and make sure they’re happy and well.

“Royal Descent was good, very good. Who Shot Thebarman and Grand Marshal also worked on the course proper and both their riders were happy.

“I thought Royal Descent was nice and sharp and Who Shot Thebarman was good too.”

Royal Descent finished fifth in the 2013 Caulfield Cup after starting as the $7 second favourite. Punters are getting a much better price this year ($21 at CrownBet.com.au) despite the mare being in better form. Waller says it is better suited now as an older mare.

“On that basis we probably should be a bit more upbeat about her chances this week because she started pretty close to favourite in 2013 when she loomed up, wasn’t strong enough and felt the track a bit.”

Who Shot Thebarman and Grand Marshal are better suited over the Melbourne Cup distance and Waller expects them to be better off with the run at Caulfield.

“Grand Marshal is a two miler that’s in an important lead-up race and it would be nice to see him charging home into sixth, seventh, eighth. That would be perfect for him.”