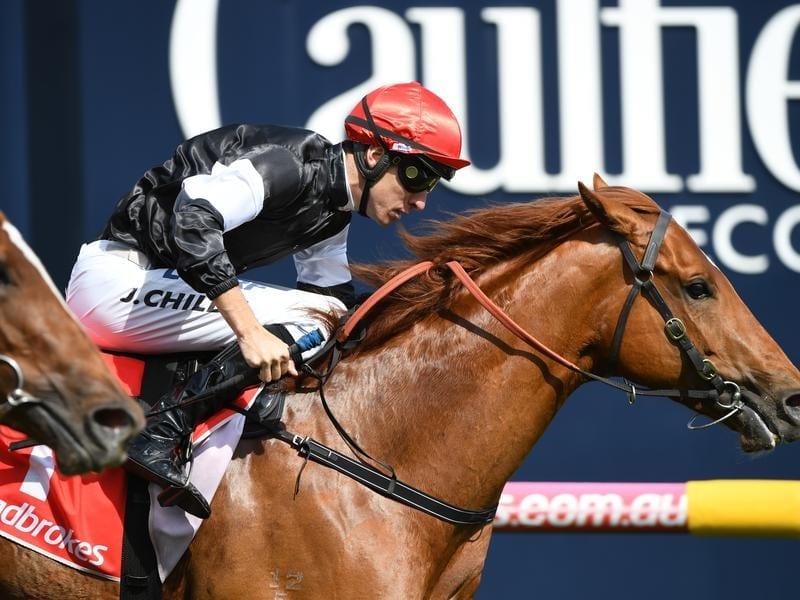 Jockey Jordan Childs says Written By is ready for his next spring target, the Blue Sapphire Stakes.

Group One winner Written By will be out to stamp his Coolmore Stud Stakes credentials when he has his final lead-up in the Blue Sapphire Stakes at Caulfield.

The Group Three $350,000 Blue Sapphire for three-year-olds is the feature on the middle day of the three-meeting Caulfield Cup carnival on Wednesday and has been used in recent years as a stepping stone to the Group One Coolmore (1200m) at Flemington.

The winners of the past three Blue Sapphires have figured in the placings of the Coolmore with Keen Array second in 2015 while Flying Artie completed the double two years ago.

Trainer Grahame Begg is focused on winning the Coolmore with Written By and the colt tuned up for the second start of his spring campaign with a gallop between races at Mornington on Thursday with race jockey Jordan Childs aboard.

“I gave him a bit of a squeeze the last 200 just to make him do something and not waste the day out and he felt really good underneath me. He had his ears pricked the whole way and I think he’s going very well.

“He’s definitely come out of his first-up run well, anyway.”

Written By ran in a 1000m-race against his own age first-up under set weights and penalties conditions and got the job done.

He needs to step up again on Wednesday against what is likely to be a stronger field.

“I thought he did a really good job first-up,” Childs said.

“He wanted to race a bit fiercely and got taken on and was there to be beaten but I thought he held them on the line.

“I think he’s got to step up again on Wednesday but he’s definitely on track for the Coolmore.

“But obviously you want to see him run well again going into that race and he’ll probably still take a bit of improvement out of it and be cherry ripe for the Coolmore.”