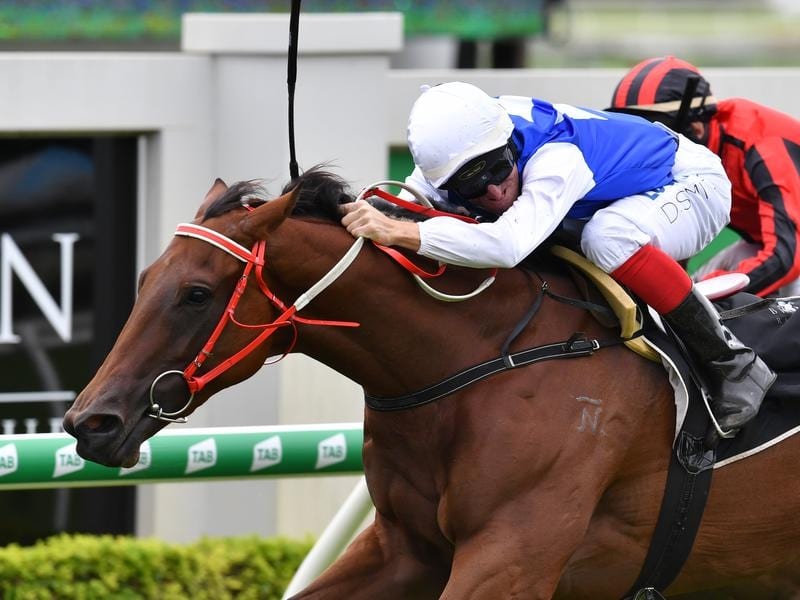 Miss Cavallo should appreciate a soft track at Doomben with rain expected to continue.

The prospect of a wet track gives Toowoomba filly Miss Cavallo another chance of an upset win at Doomben.

Doomben has been soaked in the past month and is in the soft range after showers this week.

Further rain is predicted with up to 15mm expected on Saturday.

Miss Cavallo is a noted wet-track horse and is unbeaten in two starts on soft tracks including a Doomben win as a two-year-old.

Her only run on a heavy track resulted in a second to The Odyssey in the $500,000 QTIS Two-Year-Old The Jewel last year.

Trainer Michael Nolan has set the $55,000 Magic Millions buy for a shot at going one better in the Three-Year-Old The Jewel next month and she will have her lead-up in the Prelude on Saturday.

“She likes the Doomben track and distance and she has won first-up,”Nolan said.

He will have promising filly Kisukano in the Two-Year-Old Prelude on Saturday.

Kisukano was a brilliant winner of her first start at Toowoomba and then ran second to star juvenile Rothfire at Eagle Farm.

“She was good as she got caught deep after being checked at the start,” Nolan said.

Rival trainer Chris Anderson has scratched promising Plutocrat from the Two-Year-Old The Jewel Prelude after she drew barrier 13.

“I just can’t draw a barrier. It is hard to win in good company from out there,” Anderson said.

Plutocrat would have been one of the favourites after an impressive debut win.

Anderson is also likely to scratch She’s A Tigress to run her at the Gold Coast on Saturday.

“She drew barrier 10 which is nearly as bad,” he said.