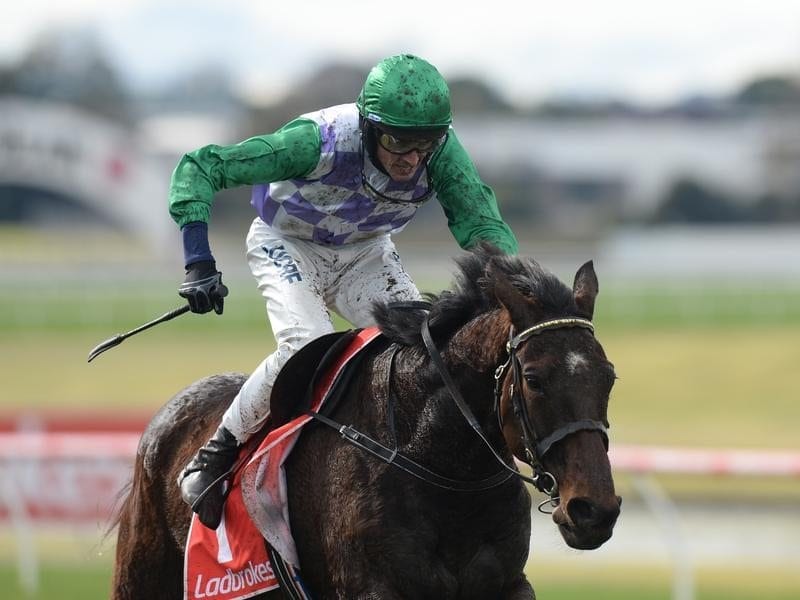 Wells has outstayed his five rivals to score a narrow win in the Crisp Steeplechase at Sandown.

Trainer Kathryn Durden admits she took Wells to Sandown with some apprehension but she has left with the Crisp Steeplechase trophy.

A year ago Wells was ready to get on the float for the trip to contest the Crisp at the track when he suffered a colic attack and then in May he arrived at Sandown for the Australian Steeplechase but was scratched after giving his head a knock en route.

On Sunday he arrived safely, jumped safely and under Richard Cully prevailed in the Crisp.

Wells will now try to emulate Bashboy by winning the Grand National Steeplechase for a third time at Ballarat on August 20.

He won it in 2014 at Sandown and again last year at Ballarat.

Durden has no doubt the rise to 4500m in two weeks won’t be any bother with her main worry what weight the handicapper will give the 10-year-old.

Under the set-weights and penalties on Sunday, Wells was conceding 2kg to the second highest runner I’ll’ava’alf, but under handicap conditions at Ballarat it will be a different story.

“Everything has gone along smoothly other than when he cut his head this campaign,” Durden said.

“I was thinking late that he was going to have to lift and hope his staying prowess kicks in and under the 70 kilos I thought he did a super job.

“I’ve always said a soft track is his best surface although he has won on a heavy track so he’s done a terrific job at his first run back on heavy ground.

“Its onwards and upwards towards the Grand National.”

Wells was sent off the $1.65 favourite and defeated Over The Yardarm ($14) by a half neck with King Of The Forrest ($17) another seven lengths third.