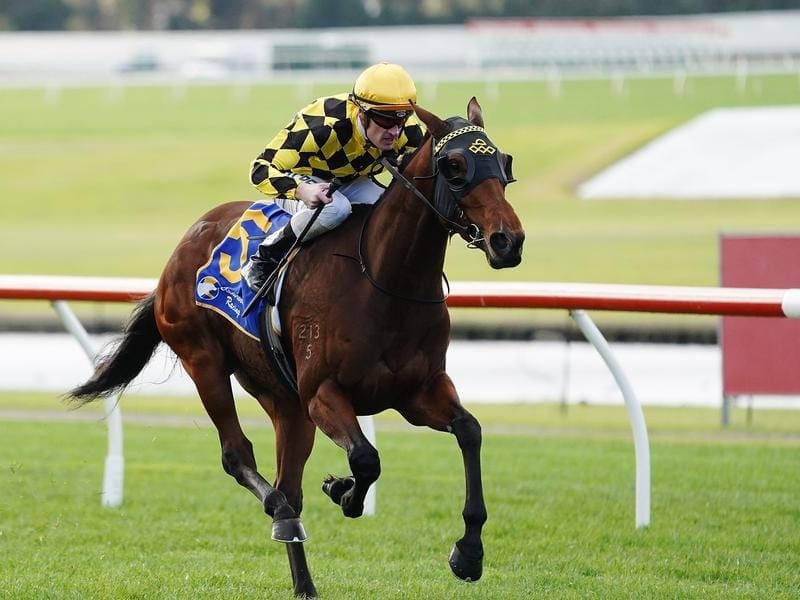 The addition of blinkers and a step up in distance has aided Tides at Sandown, with the sister to multiple Group One winner Shoals racing to a convincing frontrunning victory in heavy ground.

The Anthony Freedman-trained three-year-old was having her fifth start in Wednesday’s Clanbrooke Racing Handicap and stepped up to 1600m for the first time.

Having been placed in her previous two city starts after a maiden win at Bendigo first-up this preparation, Tides rolled along in the lead on Wednesday and never gave her rivals a look-in.

Ridden by Mark Zahra, Tides ($3) notched her first city victory, scoring by 3-1/2-lengths over Pierro Belle with another length to Kiss And Cry third.

“We’ve been waiting to get her out to this sort of trip all along,” Freedman’s son, and assistant trainer, Sam Freedman said.

“She was just immature and still learning how to go about racing. We just didn’t want to throw the blinkers on too early.

“Mark trialled her 12 days ago without the blinkers and thought the blinkers could really help her so we worked her in them and found that she really improved in them.

“The blinkers definitely sharpened her up and rolling forward on her was obviously the way to go.”

Like four-year-old Shoals, who was retired earlier this year, Tides is owned by John Messara’s Arrowfield Stud and Jonathan Munz’s Pinecliff operation.

Freedman said they would see how Tides came through the win before working out the next step for the filly who he believes can stretch out further in distance.

He said it would be up to the filly’s owners whether she races on beyond this season.

“Jonathan Munz and Arrowfield will really tell us where they want to go,” he said.

“If they want to send her off to stud she’s got a lot of value there, and if they want to race her on she is probably still improving.

“We’d love to see her in training for another preparation but it’s really up to them.”

Michael Poy rode a winning double aboard Hostar and Notio, taking him to the outright lead in the Melbourne apprentices’ premiership on 26 wins, two more than Ethan Brown.

Fellow apprentice Ben Allen was suspended for eight meetings for careless riding aboard two-year-old filly Indiscretion who finished runner-up to Excused on debut in the Yulong Handicap.