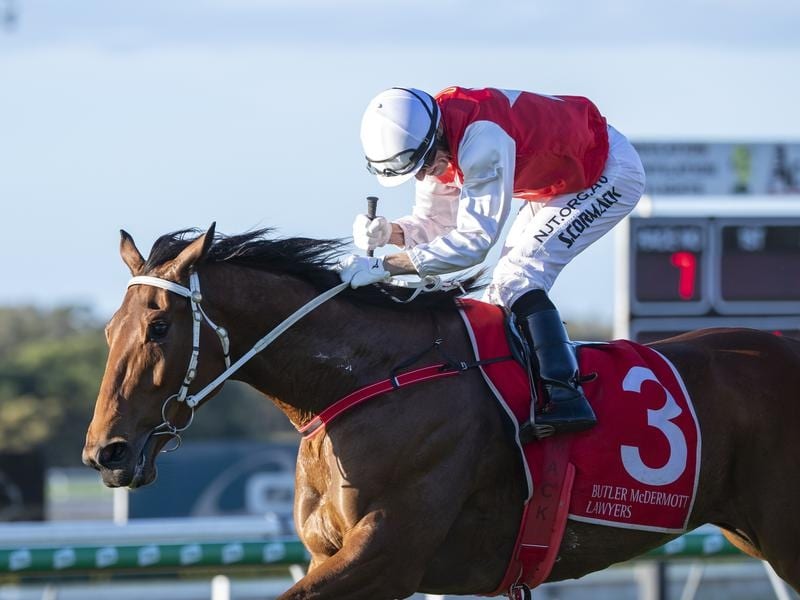 Wapiti lifted himself off the canvas to win the Group Three Winx Guineas at the Sunshine Coast.

Caloundra trainer Jack Duncan has never been afraid to start Wapiti against the best horses and it paid off in the Group Three Winx Guineas.

The Sunshine Coast Guineas was renamed after champion mare Winx who started her run of 33 straight wins in the race in 2015.

No one would ever mention Winx and Wapiti in the same breath but Wapiti showed similar heart to the great mare in winning.

Backed from $3.10 into $2.45 favouritism, Wapiti shared the lead to the turn and worked to the front in the straight only to be swamped by Knight Mariner ($6).

The Tony Gollan-trained Knight Mariner looked certain to run away but Wapiti came back strongly to score by a half length.

Duncan ran Wapiti in an open three-year-old at his first start last November when he ran second at $101 behind top sprinter The Odyssey.

Since then Wapiti has raced mainly against the best horses in his age group and now has three wins and four seconds from 11 starts.

Duncan, who always calls Wapiti by the nickname Moose, said he had always felt the gelding was a top-class horse.

“He has never run a bad race. Wapiti has been hampered by wide barriers or he would have an even better record,” Duncan said.

“Everything I have asked him to do he has responded to.”

Wapiti was bred by another Caloundra trainer in Carolyn Hickey and went through the Magic Millions sales.

Duncan is now likely to look at the Queensland summer carnivals for Wapiti.

“He was coming back from 2000m today and that might have helped at the finish. But I would like to try him again at a middle distance,” Duncan said.

“Love Express was only a short head behind the second horse. He is pretty handy as well,” Duncan said.

Gollan said Knight Mariner had been good at only his sixth start on an unsuitable heavy track.

Another Caloundra galloper Star of Michelin ($4.40) ran fourth after not being suited by a slow early pace.