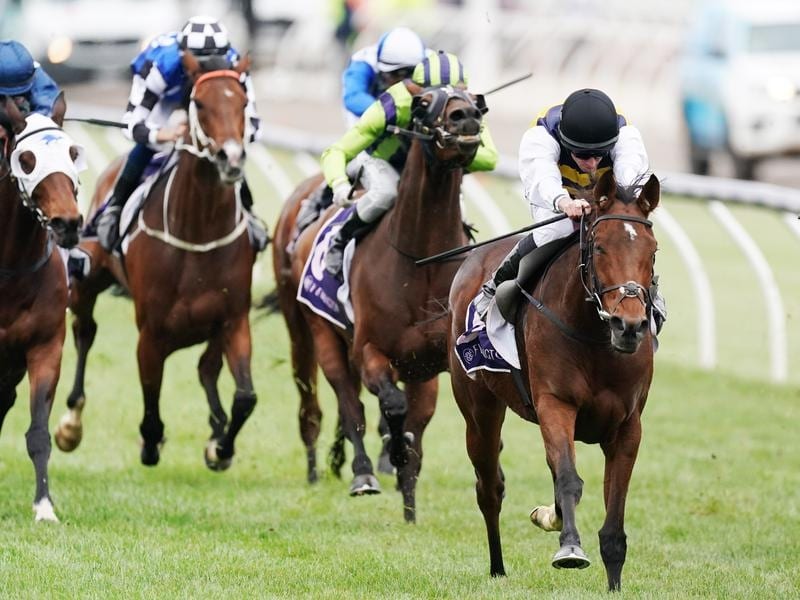 Ventura Storm (green) has a habit of lifting his head close to the line but is still racing well.

Imported stayer Ventura Storm has raced consistently without winning this preparation and has also displayed a quirk late in his races which has his connections puzzled.

The gelding, who runs in Saturday’s Group Two Zipping Classic (2400m), has a habit of lifting his head late and has done it to varying degrees inside the final 200m in each of his past five races.

He goes to the Zipping Classic on a seven-day back-up after finishing fourth, beaten 2-1/2-lengths by Irish mare True Self, in last Saturday’s Queen Elizabeth Stakes (2600m) at Flemington where he again raised his head in the final 50m.

“He does that thing where close to the line he lifts his head,” co-trainer Tom Dabernig said.

“That’s a little quirk that he’s got. We’ve had it looked at by our vet and we’ve had second opinions and we can’t see a physical reason why he does it.

“He lifts his head and then he actually goes again.

“Some horses, their head comes up and their run ends and they don’t finish the race off, but he does it and then surges again.

“It’s a funny one. I must admit we’re all a bit puzzled by it.

“We’ll just trust that he’s a genuine, fit horse and hopefully he’ll be around the money.”

Ventura Storm has not won since last year’s Moonee Valley Gold Cup but has finished in the top four in three of his past five starts.

The seven-year-old is on the third line of betting for the Zipping Classic at $7.50 behind import Southern France ($3.80) and multiple Group One winner Humidor ($3.90).

Humidor finished ahead of Ventura Storm two starts ago when they were fourth and fifth, respectively, in the Moonee Valley Gold Cup.

“Humidor is well in the market but he’s been struggling to find his form and Southern France, you’d have to respect him,” Dabernig said.

“But on his best form and the way he’s been racing consistently, Ventura Storm would be around the mark too.”