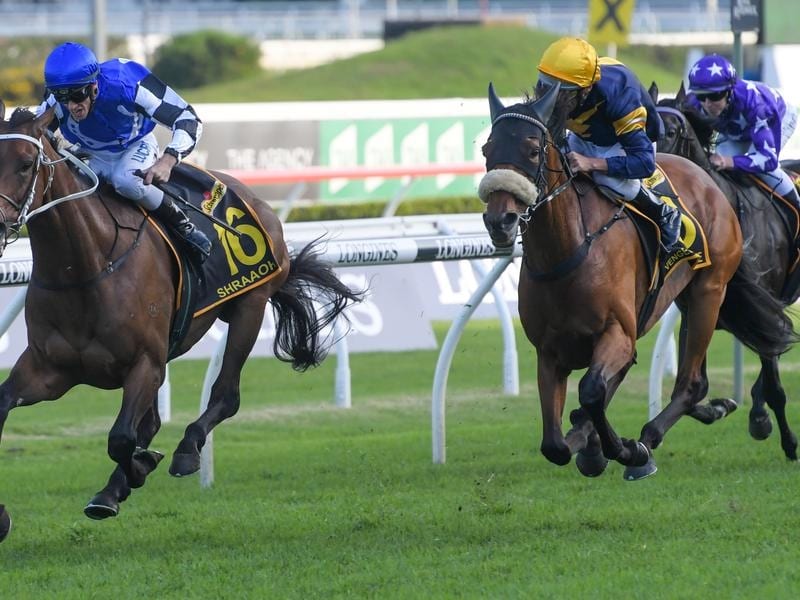 Sydney Cup runner-up Vengeur Masque (r) is on trial for the Adelaide Cup in the Roy Higgins.

The performance of well-performed stayer Vengeur Masque in the Roy Higgins Quality at Flemington will be a crucial test for the Adelaide Cup nine days later.

The Mike Moroney-trained eight-year-old has his second start back from a lengthy injury absence in Saturday’s Listed Roy Higgins Quality over 2600m.

Vengeur Masque was second in last year’s Group One Sydney Cup (3200m) but missed the 2019 spring carnival because of a hock injury suffered in the paddock.

He made his comeback in an 1800m-handicap at Caulfield earlier this month, finishing eighth of the nine runners, just over five lengths from winner Ryan’s Fender.

Vengeur Masque steps up another 800m and while Moroney believes the stayer is going well, he feels he is yet to reach peak fitness after a long time off the scene.

“If he goes well enough we’ll run in the Adelaide Cup,” Moroney said.

“He’s just one run behind because he had that long a break and came back pretty fat. I never thought I’d ever say that about him, but he has a bit.

“He would have to run well enough to run in the Adelaide Cup.

“In my mind he’s still half a run off, which means he would still be pretty competitive on Saturday in that field, I would think.”

Vengeur Masque, to be ridden by Damien Oliver, has 60kg and is giving between 5kg and 6kg to all his rivals in Saturday’s race.

All seven acceptors in the Roy Higgins hold Adelaide Cup nominations with Vengeur Masque heading the weights for the Group Two 3200m-race at Morphettville on March 9 with 59kg.

The Chris Waller-trained Dabiyr is favourite for both races having won the Listed Torney Night Cup (2500m) at The Valley on February 14.