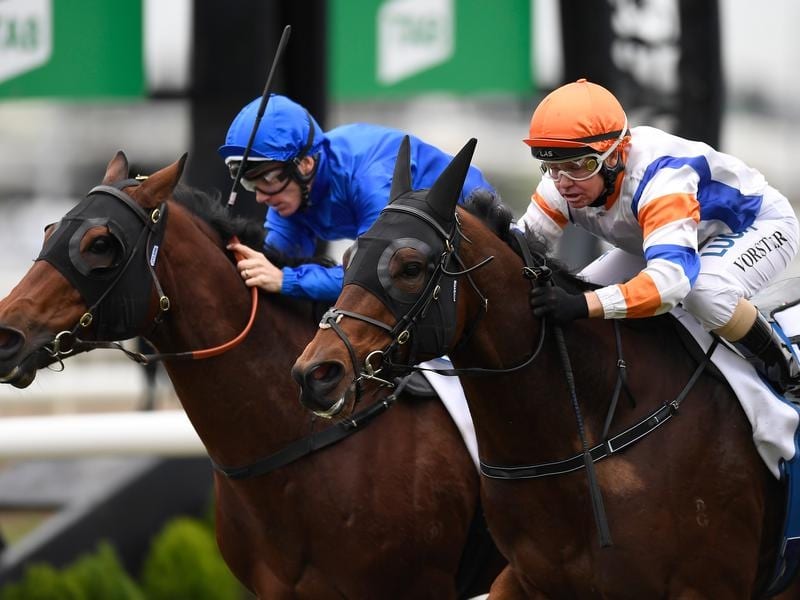 Vinland (right) has earned another Queensland start after winning The Wayne Wilson at Eagle Farm.

Vinland ($21) was ridden by South-African born jockey Barend Vorster who was having his first ride in Queensland.

The gelding won by a long head from Duca Valentinois ($8) with Order Again ($5.50) a short neck away third.

Vinland has always been rated a black-type contender by trainer Tony McEvoy.

“He’s been a very unlucky horse this fellow. His racing style is to get back and needs a lot of things to go right for him and as we know in racing it rarely does,” McEvoy said.

“This looked a really good race for him.”

McEvoy said Vinland will remain in Queensland to contest the Listed GH Mumm Handicap (1800m) at Eagle Farm on June 22.

“He needs a track like Eagle Farm with the beautiful big spaces. Today Barend was wide but he had cover and was happy for the horse to get into a gallop and he really finished it off well,” he said.

“Early days I said to the owners this is a Group horse, I really felt that. But his racing style has been his biggest problem because he gets back and often doesn’t quite get opportunities.

“When he gets the opportunity like he did today, he showed he’s a pretty good horse.”

“He wouldn’t come out from behind the other horses and when I eventually did get him into the clear he got his head on the side,” Cassidy said.

“Had he been able to come around them their heels when I wanted to he could’ve won the race.”