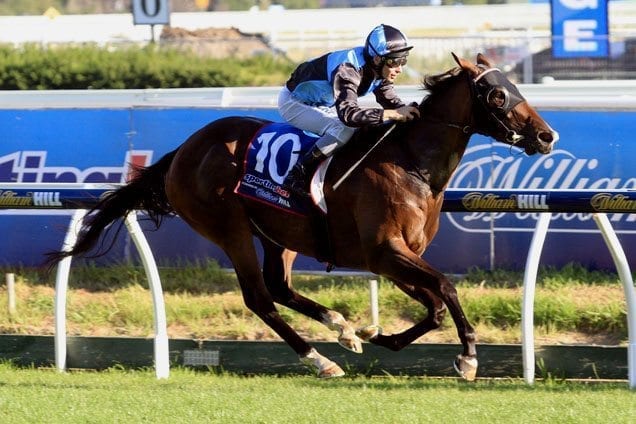 IT was anything from the usual quality of a Missile Stakes field, but despite the scratching of stable star Capitalist, Peter and Paul Snowden were able to snag the group two with a new stable addition.

Tycoon Tara ($7 at Crownbet.com.au) took advantage of the extremely heavy track conditions and a soft lead to hold drifting favourite Rebel Dane at bay down the Randwick straight. The six-year-old is a recent addition to the Snowden stables after racing in Victoria with Symon Wilde.

It was coming off a last start failure at Flemington, but its best form has come on rain-affected tracks and it relished the heavy going to take out the feature by a half-length in a far from missile time of 1:15.64.

“It’s a great result for the new owners,” co-trainer Peter Snowden said. “She was brave. She put her hand up and had a good crack.

“He (jockey, Blake Shinn) knew he had a horse on empty, but she was brave.”

The initial idea was to send the daughter of Written Tycoon to stud, but Snowden might have to rethink his plans following the win.

“(If) she keeps winning she might not be going to stud,” he said. “The idea was to give her 2-3 runs to see if she could recapture her best form and she has.”

Blake Shinn produced a smart ride as leaders were having their way at Randwick on Saturday and Shinn was able to stack up the field of only five runners approaching the turn. Tycoon Tara was running on empty as Rebel Dane and Mount Nebo challenged on its outside, but the win was never in doubt.

“Full credit to the Snowdens. They had her prime fit for today. She beat a real top class horse in Rebel Dane so full credit to her,” Shinn said.

Tycoon Tara will likely head to the Group 3 $125,000 Toy Show Quality Handicap at Randwick on August 20 whilst stablemate and Golden Slipper winner Capitalist will headline the San Domenico Stakes at Rosehill next Saturday.