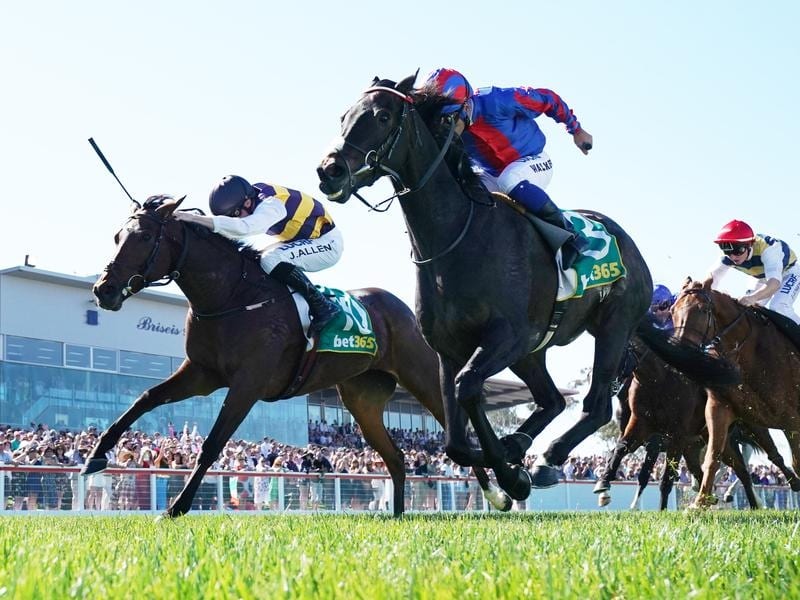 Runner-up in the Geelong Cup, Irish mare True Self (left) is favourite for the Queen Elizabeth.

Irish mare True Self missed out on a Melbourne Cup start but is a short-priced favourite to claim a consolation in the Group Three Queen Elizabeth Stakes at Flemington.

The Willie Mullins-trained True Self went close to chasing down subsequent Melbourne Cup runner-up Prince Of Arran in the Group Three Geelong Cup (2400m) on October 23.

True Self was left stranded at 26th in the Melbourne Cup ballot with a capacity field of 24 running in Tuesday’s $8 million race.

Her opposition in the $300,000 race includes Carif who has shown staying potential and was second in last Saturday’s Hotham Stakes (2500m) at Flemington, won by the Joseph O’Brien-trained Downdraft.

The Peter and Paul Snowden-trained Carif was also runner-up in the St Leger (2600m) at Randwick two starts ago when ridden by Kerrin McEvoy who will be aboard on Saturday.

“I got caught deep on him and ran second to Hush Writer two starts ago and he was flashing home there the other day,” McEvoy said.

“He’s up in trip a little bit more and if there’s rain around tomorrow he will enjoy it.

“Actually one of my uncles owns a share in True Self. So he won’t talk to me if Carif gets the money.

True Self is one of three runners in the Queen Elizabeth who race in the colours of syndicator OTI Racing, with one of those Grey Lion who is trained in Sydney by Matthew Smith.

Grey Lion, who was second in the 2017 Queen Elizabeth when trained by Matt Cumani, will be out to bounce back from an unplaced Geelong Cup run and Smith has been happy with him since then.

“It’s a tough race so I’m not sure if he can win that but he will run well,” Smith said.

“He got out of position in the Geelong Cup, from about the 700 onwards he got shuffled back and ended up last turning for home but he kept finding the line.

“He’s in good shape and I can’t fault him. If he can get a decent run in transit he can run a good race.”