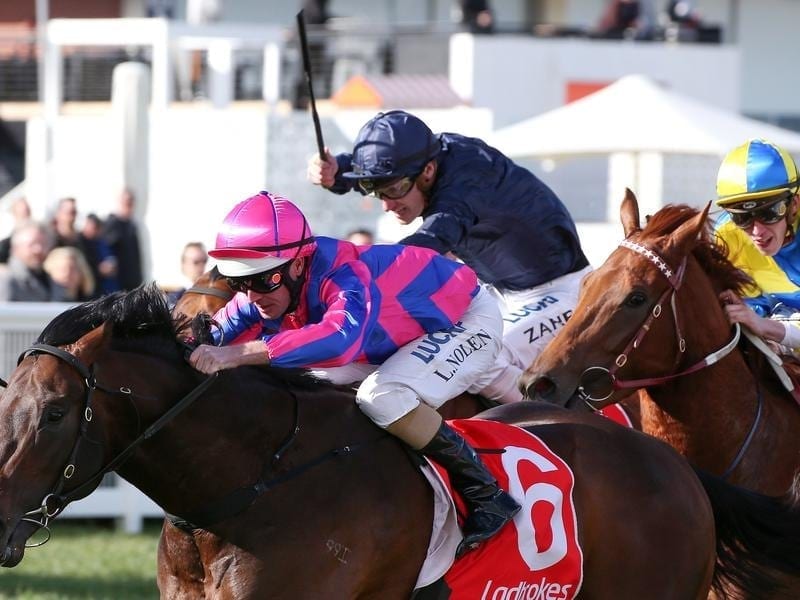 Tony Nicconi has kept an unbeaten record in winning the Vain Stakes at Caulfield.

Lindsay Park looks set for a successful season with its three-year-olds after providing a one-two finish in the Vain Stakes at Caulfield.

Ridden by Luke Nolen, Tony Nicconi was sent off the $2.30 favourite in defeating Long Leaf ($6) by a long neck with Native Soldier ($13) a half length away third.

He said Tony Nicconi was likely to return to Caulfield in two weeks for the McNeill Stakes before tackling the Danehill Stakes on September 15 and the Group One Coolmore Stud Stakes on November 3.

Hayes said there was improvement to come from the pair.

“Tony Nicconi did all the hard work into the wind while Long Leaf had the weight penalty,” Hayes said.

“Tony only went into it off one trial so there’s a lot left for him for the spring and Long Leaf, first-up, running short of his distance, put his hand up for the Golden Rose.

“I thought it was a terrific effort.

“I think these two are up the pointy end of our three-year-olds, they’re very good and I’ve got a nice horse trialling next week called Aylmerton who I think could mix it with these horses.”

Aylmerton was trained by Jean Dubois before transferring to Lindsay Park after Coolmore Stud, who also own Long Leaf, bought into the colt.