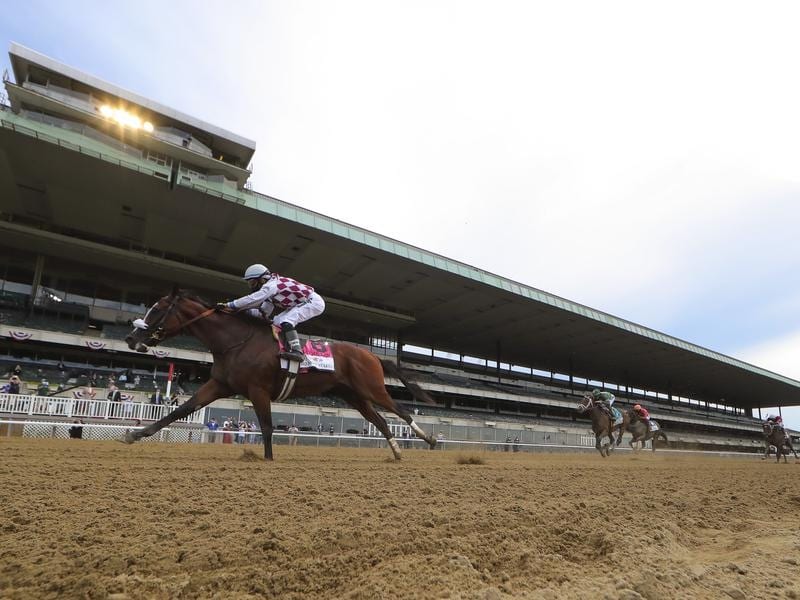 Tiz the Law cruised to victory in the Belmont Stakes with jockey Manny Franco on board.

Tiz the Law has won the Belmont Stakes in front of empty stands on Saturday, clinching the first leg of horse racing’s Triple Crown.

The colt was followed by Dr Post and Max Player at the New York event, which is traditionally the last leg of the three races that make up the Triple Crown.

However, this year it was contested first as the Kentucky Derby and the Preakness Stakes had to be postponed until later in the season due to the COVID-19 outbreak, which has claimed some 120,000 lives in the United States.

Odds-on favourite Tiz the Law became the first New York-bred horse to win the Belmont since 1882.

“We buy New York-breds, that’s our game, and we don’t spend a lot of money.”

Tiz the Law hung back in third place for much of the race, keeping on the outside in the 10-horse field, before unleashing on the home stretch to surge into the lead and claim a decisive victory.

“I was pretty confident by the time we hit the seven-eighths pole,” jockey Manny Franco said.

“He was so kind and relaxed for me.”

Trainer Barclay Tagg – whose 2003 horse Funny Cide won the Kentucky Derby and the Preakness Stakes – said he was glad to have “lived long enough to have another horse like this.”

“I’ve wanted to have a Belmont victory before I gave it up or died or something like that,” he said with a laugh.

Roaring crowds were replaced with an eerie silence at the finish line, as fans and even owners were barred from the stands in accordance with safety protocols during the pandemic.

The Belmont, a typically raucous affair that drew a record 120,139 spectators in 2004, was empty except for venue employees and some members of the media, with concession stands and betting windows closed.

The Kentucky Derby is set to be the next race in the Triple Crown on September 5 and the Preakness is set for October 3.