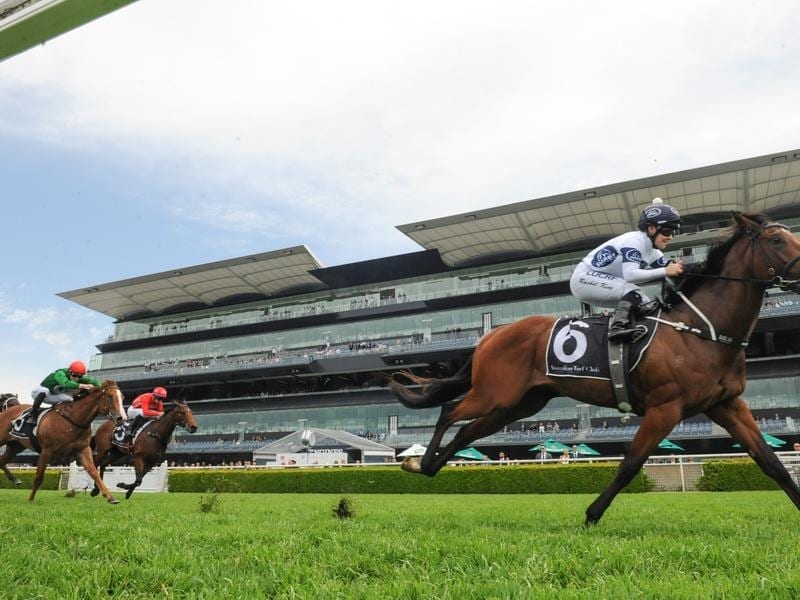 Time To Reign will be out to confirm his standing as Gary Portelli’s best Golden Slipper chance.

The Rosehill meeting will take a back seat to the rich Derby day program at Flemington but Sydney punters might be offered an early Golden Slipper insight.

Having won the world’s richest two-year-old race last year with She Will Reign, trainer Gary Portelli is setting his sights on a family double with the mare’s half-brother Time To Reign.

A dominant winner on debut, Time To Reign will go a long way towards banking enough prize money to qualify for a 2019 Slipper berth if he wins Saturday’s Lack Group Handicap.

“If he can win on Saturday it will certainly help us with the program next preparation. He’ll go out win, lose or draw on Monday morning.”

She Will Reign is by Manhattan Rain while Time To Reign is a son of Time For War, a sire by Snitzel who produced only two crops of foals before his sudden death in 2016.

The pair share the same dam, Courgette, but Portelli says the similarities end there.

“They look completely different on type,” he said.

“This fellow has more of a Snitzel look about him. He’s big, light bay, a good-sized horse and he’s got a lot of growing left to do.

“She was short, squatty, short-coupled, heavy muscled. She looked more like an 800 metre horse or quarter horse when she was young.

“They’re two different horses, I wouldn’t even think they were related.”

Time To Reign is an odds-on favourite with only the unraced Jonah, who won a Randwick barrier trial on Tuesday, given a realistic chance to challenge him.

Stablemate Ronstar will also carry high expectations when he resumes over 1200 metres.

The three-year-old showed potential at his initial campaign which included a win over Diplomatico who is an $8 chance for Saturday’s Group One Coolmore Stud Stakes at Flemington.

Portelli had planned to run Ronstar in the Brian Crowley Stakes two weeks ago but scratched due to a heavy track.

Strome rounds out Portelli’s Rosehill team when she returns in the AMWU Handicap and is expected to improve with racing.