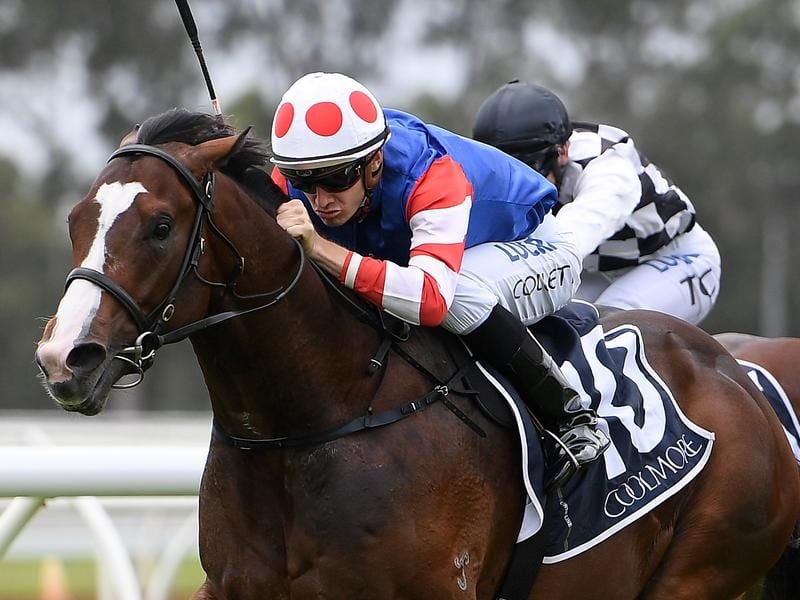 Not Feint Hearted will get his chance for black-type in the Listed Rosebud at Rosehill.

Trainer Gary Portelli’s plans to get Silver Slipper winner Time to Reign off to an early season start have been thwarted after the colt developed a temperature.

Time To Reign will miss Saturday’s Listed Rosebud at Rosehill but Portelli will give stablemate Not Feint Hearted his chance in stakes class in the 1100m-race for three-year-olds.

A half brother to former stablemate, 2017 Golden Slipper winner, She Will Reign, Time To Reign had been primed with two barrier trials.

“We have treated Time To Reign so he can’t run,” Portelli said.

“You wouldn’t know there is anything wrong with him. He’s not sick. It’s just that we take all their temperatures and his was 39.

“We will wait four weeks to the San Domenico Stakes now. There’s a long spring ahead.

“So Not Feint Hearted can step into his spot and if he could get some black-type that would be a bonus.”

Not Feint Hearted won a maiden at Warwick Farm in March and at his fourth start last Saturday week, he ran second to the Chris Waller-trained Lucicello who is among the 11 Rosebud entries taken on Monday.

Godolphin filly Athiri is also among the nominations to have her first start since she ran fourth in the Percy Sykes in April won by the Peter and Paul Snowden-trained Anaheed, another Rosebud entry.

Among Athiri’s other juvenile performances was her third in the Magic Night Stakes won by stablemate and subsequent Golden Slipper winner Kiamichi.

Godolphin trainer James Cummings is upbeat about her chances and those of Alizee, favourite for Saturday’s Group Two Missile Stakes (1200m).

The mare is in contention to be Godolphin’s runner in the $14 million Everest after the global operation secured the slot forfeited by Damion Flower who is facing serious drug importation charges.

Godolphin’s No.1 seed for the Everest is Osborne Bulls, third in the race last year and second in five consecutive Group One races during the autumn.

Osborne Bulls is scheduled to run in a barrier trial at Rosehill on Tuesday.