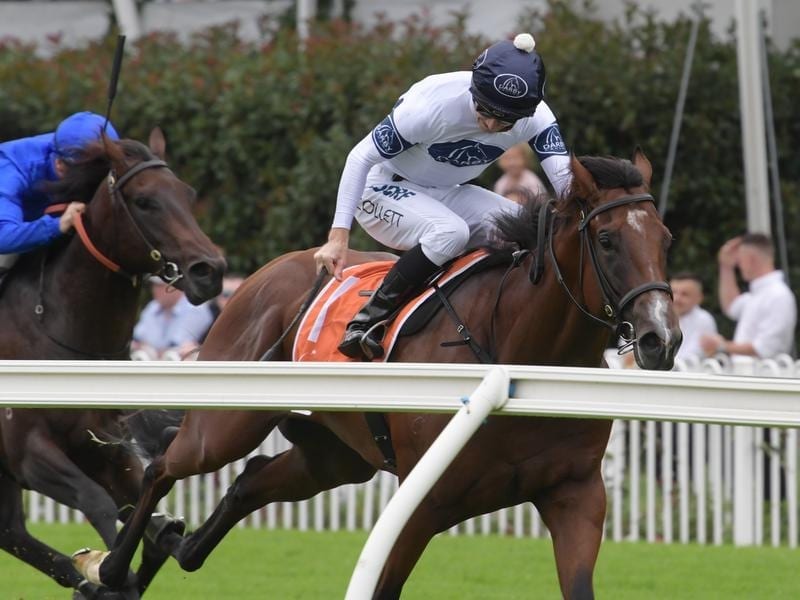 Time To Reign is primed for the Todman Stakes, his lead-up to the $3.5 million Golden Slipper.

Time To Reign has had a searching gallop ahead of the Todman Stakes which his trainer hopes will confirm his standing as a favoured runner in the Golden Slipper.

The colt, a brother to 2017 Slipper winner She Will Reign who was also trained by Gary Portelli, upset Slipper favourite Tassort in the Silver Slipper last Saturday week on a soft track.

Godolphin’s Tassort is now in doubt for the Slipper with a bruised foot and has been withdrawn from Saturday’s Todman with trainer James Cummings hoping he can be fit for the Pago Pago a week later.

“Time To Reign beat Vincero in the gallop and has come on since his Silver Slipper win,” Portelli said.

“He is absolutely cherry ripe. He lost two kilos after the race and put it back on within two days.

“And now we know he can cope if it’s wet or dry.

“And we also know he will be going to the Slipper as fit as he can be,”

Time To Reign has won three of his four starts with his sole defeat in the Lonhro Plate won by Bivouac who is a likely Todman rival.

As well as two Slipper qualifying races, the Todman and the Reisling, Saturday’s meeting features two Group One races, the Randwick Guineas (1600m) and the Canterbury Stakes (1300m).

The Guineas will be whittled down to a maximum field of 20 from its 94 entries.

The Chris Waller-trained The Autumn Sun heads the market to add the Guineas to his Group One wins in the J J Atkins, Golden Rose and Caulfield Guineas.

Trainer Mark Newnham will decide at acceptance time on Wednesday morning whether Group One Surround Stakes winner Nakeeta Jane takes the expensive colt on in the Guineas.

Triple Group One winner Trapeze Artist is favourite for the Canterbury Stakes.