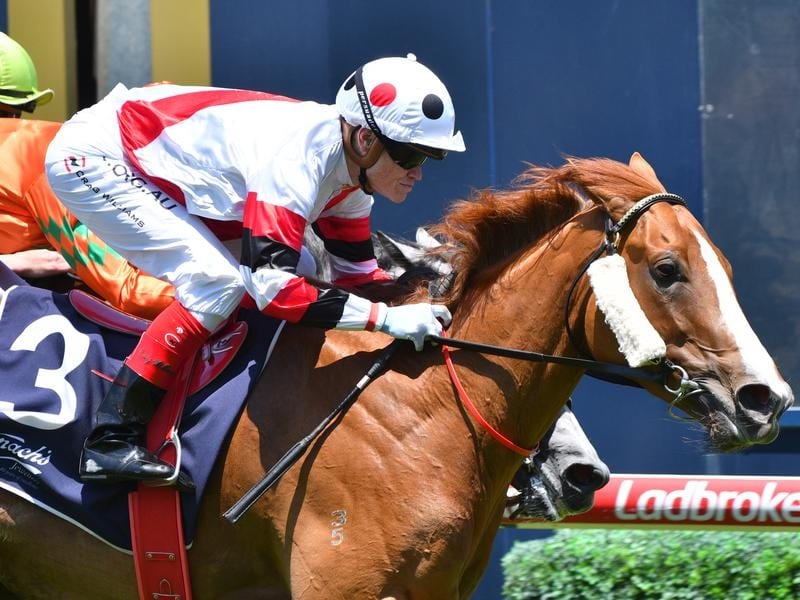 It was three in a row for Neighbourhood with a narrow victory at Caulfield.

Trainer Enver Jusufovic is tempted to raise the bar further after Neighbourhood completed a winning hat-trick with a last-gasp victory at Caulfield.

Neighbourhood is unbeaten in three runs this campaign and added Thursday’s Catanach’s Jewellers Handicap (1400m) to previous wins at Sandown and Pakenham.

The Jusufovic stable has been in great form, winning six races from the last nine runners it has sent to the races.

“I’ve got to say a big thanks to my staff,” Jusufovic said.

“At this time of year we work exceptionally hard and if you have the stock you have to be disciplined and try and pick and choose.

“I don’t always get it right, of course, but today was a good race to win with that prize money.”

Jusufovic said he would discuss the merits of the victory with jockey Craig Williams and previous rider Michael Dee, who had been successful on the mare at her two earlier starts.

The trainer liked the sound of possibly stepping Neighbourhood up to stakes level in a race like the Chester Manifold Stakes (1400m) at Flemington on January 18.

“I think the big track will suit her but I will have a talk to Craig and Michael Dee when he gets back,” Jusufovic said.

“But it’s been suggested she’s more brilliant over 1200 metres.