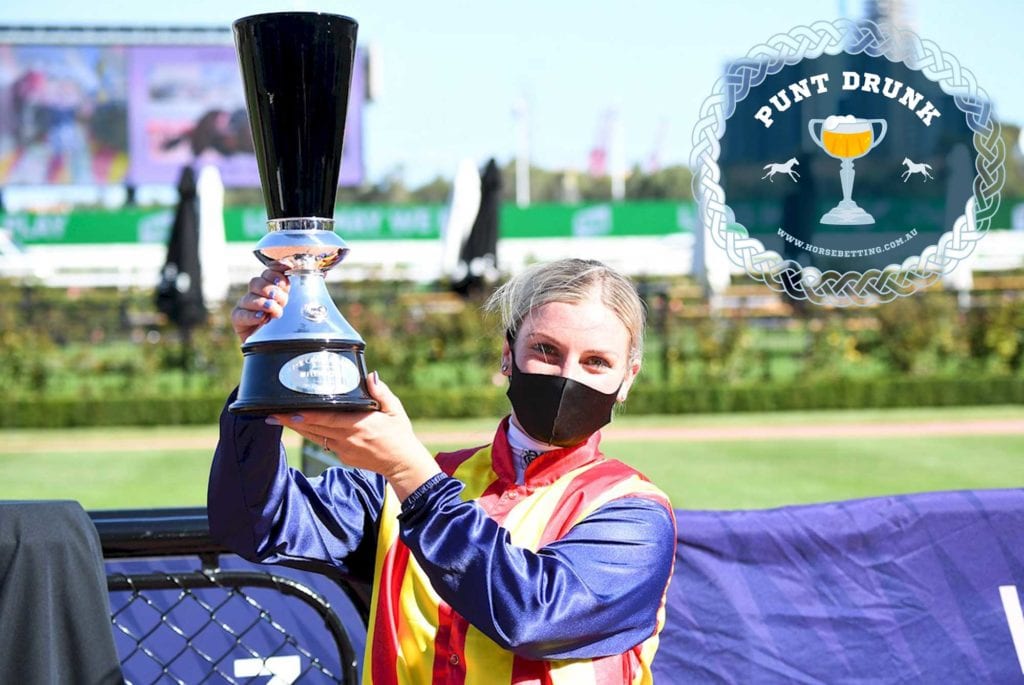 Boy oh boy what a day of racing that was! The female jockeys dominated the big races, Melody Belle got rolled as a $1.45 chance at Te Rapa and we may have found another two-year-old who could be a future star of the sport. We hope it was a profitable day on the punt for all you battlers out there, and to those in Victoria who have to spend today (Valentine’s Day) at home with their girlfriend doing the romantic things. Our heart bleeds for you as we head to the pub for a Parma!

Back Kah, Shout the bar!

How bloody good is Jamie Kah? We’ll tell you. Really bloody good! Kah won three races at Flemington yesterday including the Black Caviar Lightning Stakes aboard Nature Strip. Strangely enough, it was only the third ride Jamie Kah had for superstar trainer Chris Waller. Those two other rides came at a State of Origin series at Doomben a couple of years ago, so Kah had randomly been assigned a Waller runner on both occasions. Well it was third time a charm for Kah when she brought up here fourth Group 1 victory when riding Nature Strip to his fifth Group 1 success. “The Strip” simply proved too strong over the concluding stages despite stablemate September Run storming home to take out second place, but all honours go to Nature Strip after such a disappointing spring it was great to see the world class sprinter back to his. Bivouac on the other hand, we still love you but we’re about to go and load up on two minute noodles for the week.

NSW has a King; take notice!

What a great mare! Colette takes out the Group 2 Apollo Stakes to come back with a big bang! Gun ride from @RachelK11 for @godolphin pic.twitter.com/1c9dTm52jO

What a star Colette is in the wet. Add Rachel King on board and with a rain affected track it is a perfect recipe for success. The Godolphin mare is now 5/5 with the sting out of the ground including last year’s Golden Eagle; so in hindsight it is hard to believe she went around at $10. With a superb steer by Rachel King only 20 minutes after Jamie Kah took out a Group 1 at Flemington, it showed that there is a genuine argument to have both Kah and King at the top of the tree when discussing the best jockey’s in the country at the moment.

JMac lands the omen bet of the day!

On Friday Dan Andrews put Victoria into another lockdown urging people to stay inside their houses for five days. Twenty four hours later “JMac” sits and steers a two-tear-old colt named Stay Inside to victory in the Pierro Plate at Randwick. It wasn’t just any old win either, the colt smashed the clock on rain affected going and solidified claims he was a promising colt following an impressive debut victory. He was $26 to take out the Golden Slipper before his win yesterday and now odds of $11 are on offer. Sets up to be a top tier Golden Slipper this year. Enthaar, Profiteer and Stay Inside? Yes please!