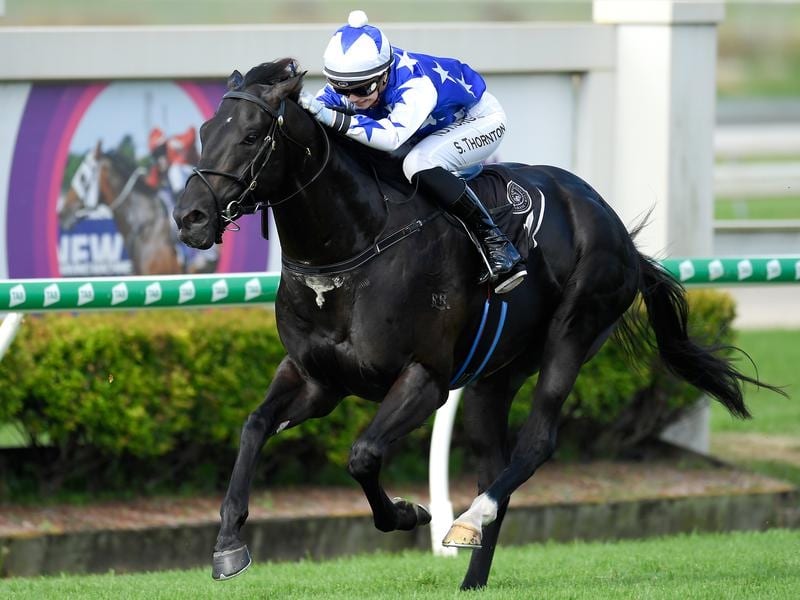 The Odyssey led all the way to win the Three-Year-Old The Jewel Prelude at Doomben.

Talented sprinter The Odyssey is poised to complete The Jewel Two-Year-Old and Three-Year-Old double after his impressive win at Doomben.

Jockey Stephanie Thornton celebrated her 21st birthday by deciding to lead on The Odyssey and the combination was never headed.

“We got a couple of cheap sectionals and was able to kick on the turn,” she said.

“He got tired late but you would expect that.”

Trainer Kelly Schweida said The Odyssey would press on to the $300,000 Three-Year-Old The Jewel on March 14 at the Gold Coast.

“He was probably the fittest I have had him early on in a campaign,” Schweida said.

“He only had a short break but on the other hand he has only had one short jump-out.

“I would think he will have some improvement in him. I think this could be his campaign.”

The Odyssey won the The Jewel Two-Year-Old last season.

That race and the three-year-old Jewel are considered the unofficial Grand Final for Queensland’s young horses.

Schweida said a trip south after the Gold Coast was not out of the question.

“The Sydney autumn is usually wet and that will suit him. But we will wait until after the Gold Coast to decide,” he said.

“That was a big run and he wins in a few more strides,” Gollan said.

Stampe ($18) made up good ground to finish third and he is another contender for The Jewel.

“That was a perfect lead-up run from him,” jockey Sean Cormack said.

Newcastle stayer Mongolian Wolf continued the domination of southern horses in Brisbane staying races and broke a 20 starts run of outs in the Friday’s Handicap (2000m).

Mongolian Wolf, the $2.60 favourite, appreciated the solid early pace to defeat another interstate visitor, Raqeeq ($3), by a short head.

“If they leave him up here he is the type of horse who can win a Cup race during the winter,” Eggleston said.

“He needs the pace on because he comes with just one short run at them in the straight.”