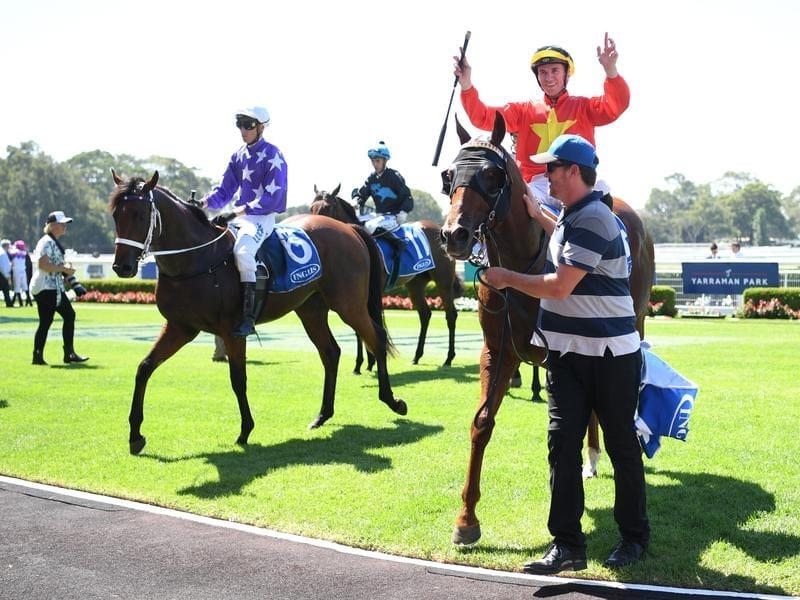 Josh Parr continued his successful run with Mark Newnham, winning the Inglis Classic on The Enzo.

A $50,000 yearling has repaid his owner with victory in the $250,000 Inglis Classic at Warwick Farm and justified trainer Mark Newnham’s faith in his ability.

The $146,000 first prize does not count towards the Golden Slipper, a race Newnham would not be keen to run The Enzo in, believing he has a future over longer distances than 1200m.

The trainer’s confidence grew on Saturday after Sandbar won the first race on the program, the Lonhro Plate, with The Enzo a close third to that colt at Canterbury last month.

“I think his future lies over 1400 to 1600 metres and races like the Sires’ Produce and Champagne Stakes will suit him,” Newnham said.

“I was confident after Sandbar won the first race and I thought The Enzo could run well given that there looked to be a lot of pace.

“He needs pressure and to be able to come from behind and it worked out like I’d hoped.

“He is named for the Ferrari so has a bit to live up to.”

For Parr the win was his sixth from his past six rides for Newnham.

The partnership between Newnham and The Enzo’s owner Patrick Lee is also pretty good.

“Patrick supported me from the start when I began training so it’s great to get a win like this for him,” Newnham said.

A former jockey and long-time track rider and foreman for Gai Waterhouse, Newnham has been training in is own right for two years and operates stables at Randwick and Warwick Farm.

The Inglis Classic sale will be the first held at the new Riverside complex at Warwick Farm, starting on Saturday night.