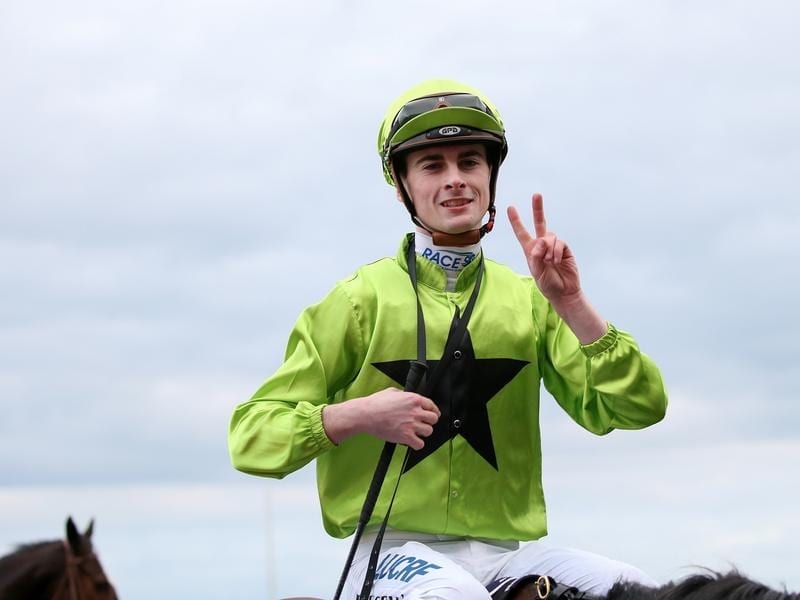 Teo Nugent has his sights on the next Melbourne apprentices title after a successful season.

After a strong finish to the season, Teo Nugent has designs on the Melbourne metropolitan apprentices’ premiership next season.

Nugent, who is indentured to Ciaron Maher and David Eustace, rode a winning double at Melbourne’s final metropolitan meeting of the season at Caulfield on Saturday after notching a winner at Sandown on Wednesday and one at Randwick in Sydney the previous Saturday.

He finished this season with 16 metropolitan wins in Victoria with Michael Poy clearly taking out the Melbourne apprentices’ title with 32.

Nugent, is set to claim the overall Victorian apprentices’ premiership with his Caulfield double taking his season total in the state to 86, seven more than Poy.

“To finish the season in town with a double, I couldn’t be happier,” Nugent said.

“It’s only my second season of riding but it’s great to get to town with city rides.

“And Ciaron and Dave have really helped me and pushed me along.

“They sent me up to Sydney last week, which was great.”

Nugent said with the country apprentices title and Victorian apprentices’ title this season in his keeping, he hopes to challenge for the city title in 2019/20.

Nugent is one of Victoria’s emerging apprentices at a time when the workload of participants has again been highlighted with last season’s champion apprentice Ethan Brown deciding to take a break from the sport.

Nugent, whose bosses have large stables at both Caulfield and Ballarat, said he had had to manage the amount of race days he competes at in recent months.

“Go back three months ago when we first opened up Ballarat, it was full on for me,” Nugent said.

“I’d ride three trackwork at Caulfield every morning and go down to Ballarat and was flat out. And I had races on top of that as well.

“So you do get fatigued and you work a lot as an apprentice.

“But I sat down and talked with Ciaron and Dave and we just limited my race day rides. Obviously trackwork wasn’t going to stop so we just had to limit as many days as we could ride. And it’s worked out.

“I do take a few days off a week myself and get through the week, but I noticed three months ago I was riding almost every day.”