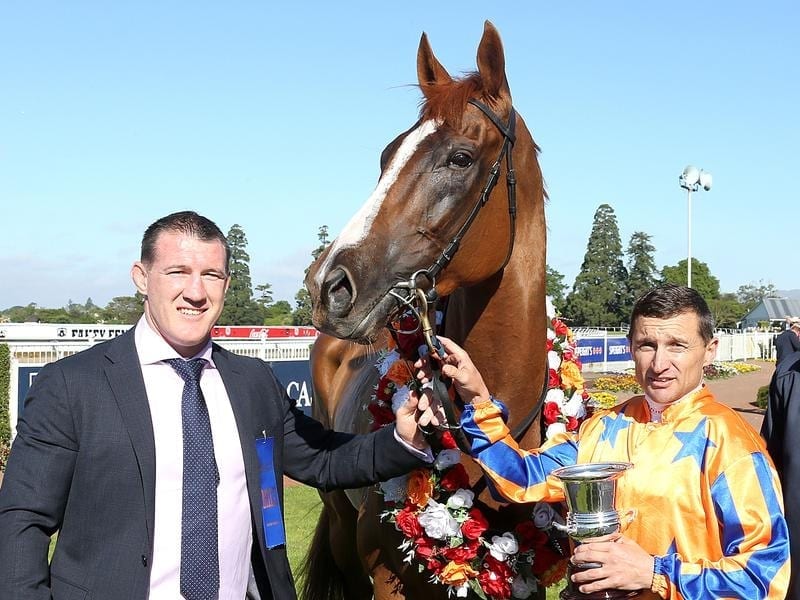 NRL star Paul Gallen’s first foray into racehorse ownership is turning into a gilt-edged investment as a shareholder in one of New Zealand’s most exciting prospects.

Gallen, the Cronulla stalwart preparing for his 19th season in the NRL, owns a small part of the appropriately named Te Akau Shark.

Te Akau Shark is a four-year-old who advanced his record to five wins from six starts with an outstanding victory in the Coupland’s Mile at Riccarton on Wednesday.

The winning margin was six lengths and confirmed an Australian campaign that will take in next year’s autumn carnival in Sydney.

Gallen admits he is a novice when it comes to racing but he was happy to take a financial interest in Te Akau Shark at the insistence of friend and fellow shareholder Steve Mace, a Cronulla sponsor.

After watching Te Akau Shark’s first four wins on television, the 2016 NRL premiership captain saw his budding superstar in the flesh for the first time on Tuesday.

He was impressed enough during a stable visit to declare his admiration for Te Akau Shark’s physique.

“One of the most impressive things I’ve seen. @teakau_shark so fit and strong muscles on muscles looking forward to see this beast run tomorrow,” Gallen posted on social media.

His praise was amplified as Te Akau Shark made a one-act affair of the Group Two race.

“I came here hoping that he’d win, and we’ve had an absolute ball over the past couple of days,” Gallen told NZ Racing Desk.

“The way he performed then, he’s an absolute superstar.

“I don’t know a lot about racing but from all reports he’s a superstar and hopefully he keeps on going.

“This is the first horse I have been involved in and to be able to come and watch the race live and actually meet the horse was a real highlight.

“I can’t wait for him to come to Sydney and do it all over again. Fingers-crossed the result’s the same.”

Jockey Opie Bosson said the sky was the limit for Te Akau Shark.

“I haven’t ridden a horse like that in a long-time,” Bosson said.

“I think he could be up there with the best I have ridden.”