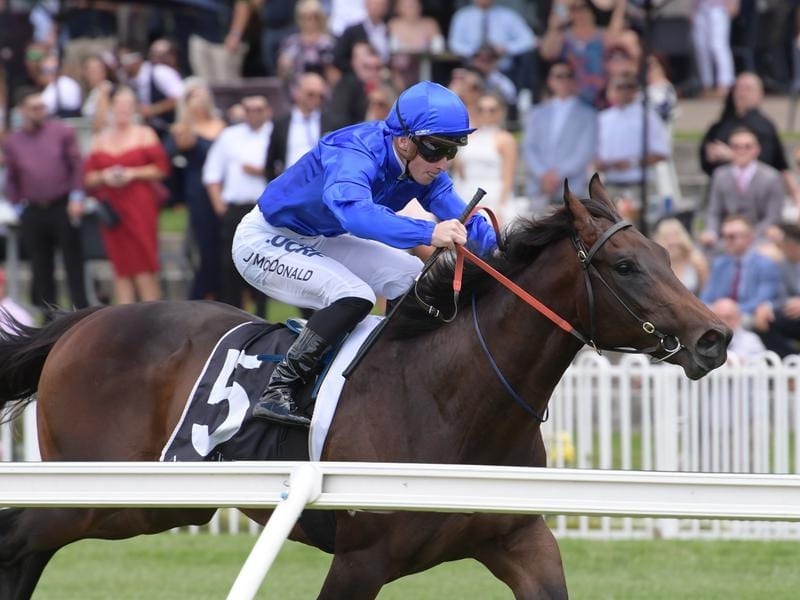 Godolphin’s Tassort is a firming Golden Slipper favourite after his impressive debut at Rosehill.

Impressive Rosehill winner Tassort has again firmed in early markets for the Golden Slipper on the back of his dominant performance in the Golden Gift.

The colt, a sibling to Group One winners Astern and Alizee, beat three other runners to win Saturday’s $150,000 Golden Gift, and the manner of his 5-1/4 length debut win elevated him to $11 from $26 for the Golden Slipper..

By Sunday, Tassort was in to $6 to win the world’s richest race for two-year-olds on March 23.

Bred and raced by Godolphin, Tassort will have a short break before he gets ready for the autumn juvenile features.

His win also gave his sire, dual Group One winner Brazen Beau, the first winner of his first crop.

Brazen Beau has had four runners this season with the David and Coral Feek-trained First Dawn third in the Listed Merson Cooper Stakes (1000m) at Sandown a week earlier.

While Tassort is having a break Alizee is getting ready for her return after serving a mandatory three-month ban for a bleeding attack in August as she was being prepared for the spring.

The dual Group One winner is by 2011 Golden Slipper winner Sepoy while Astern, who is now at stud, is by Medaglia D’Oro.

Cummings said Alizee was a few weeks off a barrier trial and was likely to have one or two starts over the summer with the autumn again in mind.

The winner of the 2017 Flight Stakes, Alizee also won the Queen Of The Turf in April.