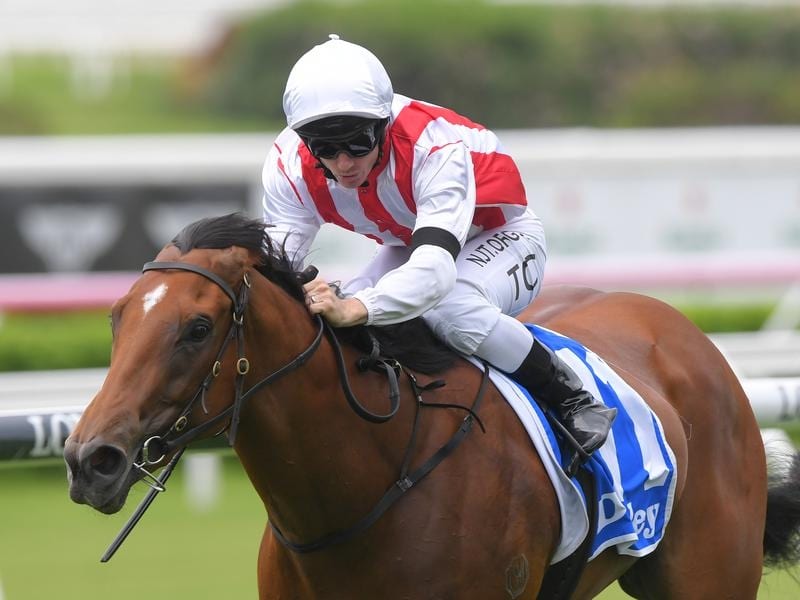 Victorian filly Supreme Idea has shown her rivals a clean pair of heels to make a winning debut in Sydney, earning a likely shot at the Golden Slipper in the process.

Trained by Anthony Freedman, who also has Blue Diamond Stakes favourite Hanseatic, Supreme Idea ($14) controlled the race under Tim Clark and never looked like being headed.

She scored by 1-1/4 lengths over Mission River ($9), who stuck to her task, with Dame Giselle ($1.65 fav) far from disgraced the same distance away third.

Brad Taylor, representing the Freedman stable, said they wanted to split up their better two-year-olds, hence the decision to bring Supreme Idea to Sydney.

While the filly is likely to stay here and follow a Slipper path, the stable has not completely ruled out a return to Melbourne for the Blue Diamond.

“It was a pretty good effort today,” Taylor said.

“She will continue to go through the traditional Slipper path. I wouldn’t think Anthony would do it, but you always have to consider it, is taking her home for the Blue Diamond next week but we’ve got a pretty warm favourite there.

“We might just keep them apart and keep her up here and hopefully get a few more wet tracks along the way and she’ll be a chance in the Slipper.”

Tommy Berry said Dame Giselle travelled like a winner but did not let down on the rain-affected track.

“I just feel she looked the winner easily but as soon as she came off the bridle I knew she wasn’t going to win then,” Berry said.

“But I wouldn’t be putting a line through her on that run.

Nash Rawiller was pleased with the way Mission River stuck to his task and felt the Gerald Ryan-trained youngster would be better over further.

Ryan indicated the colt would have his next start in the Skyline Stakes (1200m) at Randwick in two weeks.

“If he gets to the Slipper we will run him there, if he doesn’t we will go to the Sires’,” Ryan said.