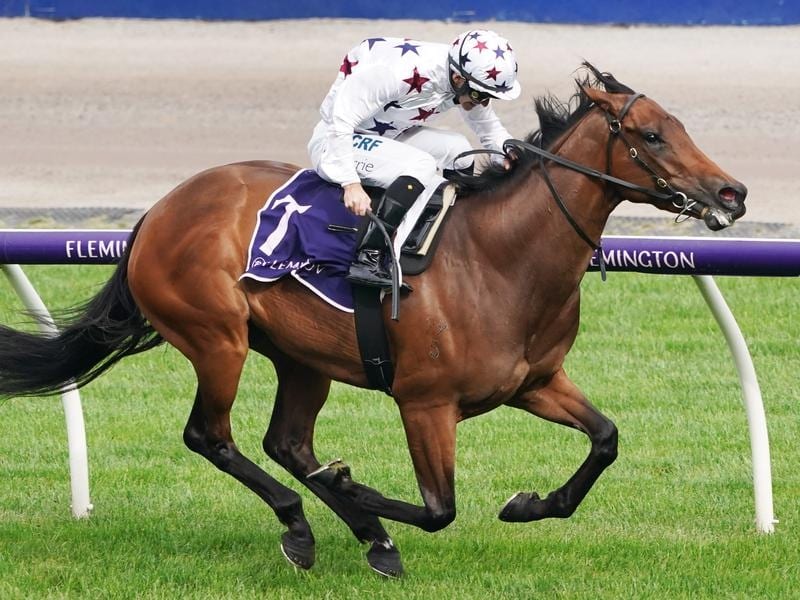 Sunlight has come back to Sydney to prepare for the $14 million Everest after her Gilgai win.

Star mare Sunlight is ready for a peak performance in The Everest and also has the Sydney weather on her side.

Sunlight has been back and forth to Melbourne after wet weather prompted trainers Tony and Calvin McEvoy to miss The Shorts at Randwick last month.

She instead ran in the Moir Stakes at The Valley, running home strongly for third before winning the Gilgai Stakes at Flemington.

She has returned to Sydney and worked well on Monday morning before going for a swim at Botany Bay.

With the chance of rain on Wednesday but mostly clear and sunny for the rest of the week, the $14 million Everest should be run on a good-rated Randwick track.

“She’s finally tightened up and looks to be at her peak now,” Calvin McEvoy said.

“We’ve just got to cruise through the week and pray to the weather Gods that the rain doesn’t come. And it’s looking pretty positive.

“We couldn’t be happier with how she’s going. She’s in fantastic order.

“But we just know she’s a little less effective on those soft and heavy tracks.

“She’s not useless. She has run third in a TJ Smith and third in a Slipper on those tracks but her key is her speed and wet tracks dull speed.”

Santa Ana Lane made his season return in the Gilgai when he came from last to finish second.

“Obviously Santa Ana Lane’s run was incredible and if he takes the right improvement first-up to second-up he’ll be hard to beat,” McEvoy said.

“But we did beat him on the same weight scale that we’re going to be meeting him at, over the same distance.

“It’s a great field and we’re looking forward to the contest.”