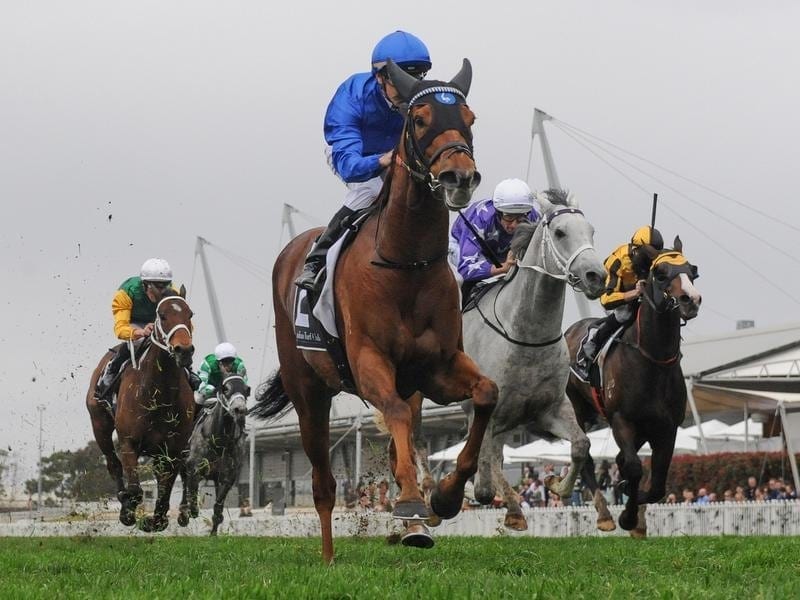 Home Of The Brave will be one of three Godolphin runners in the Group One Sir Rupert Clarke Stakes.

Godolphin’s international visitor Jungle Cat will add interest and class to the Group One Sir Rupert Clarke Stakes at Caulfield.

But it is two of the global operation’s Australian-trained sprinters who are holding sway at the top of early betting.

And Godolphin’s Australian trainer James Cummings saddles up import Home Of The Brave and Osborne Bulls.

Home Of The Brave beat Group One winners D’Argento and Trapeze Artist in the Theo Marks Stakes in Sydney in his second Australian star and opened the $4.60 favourite on Wednesday.

“He took a few big scalps in the Theo Marks, so he deserves the chance to perform at Group One level,” Cummings said.

“He was a bold front-running winner last time and he was out in front at his previous start at Flemington. But he doesn’t need to race like that.

“He’s worked a lot better than he did prior to his first run at Flemington. If anything, he is a bit sharper.”

Osborne Bulls has risen through the ranks with eight wins from 11 starts and is set for a belated introduction to Group One racing after being left stranded as second emergency in the Stradbroke Handicap in June.

He resumed with a narrow win over Land Of Plenty in the Listed Regal Roller Stakes last month then missed the Chandler Macleod Stakes, won by Land Of Plenty, due to a temperature.

Osborne Bulls shared the second line of betting on Wednesday with Land of Plenty at $6, while the Al Quoz sprint winner Jungle Cat was at $10.

“Osborne Bulls is in great form and he’ll be fit enough even though he hasn’t run for a few weeks,” Cummings said.

“He was very fresh in his gallop on the grass at Flemington on Tuesday morning and we’re looking forward to seeing how he shapes up at this level.”

Appleby will be in Melbourne to see Jungle Cat run in a race he has been aimed towards for some time.