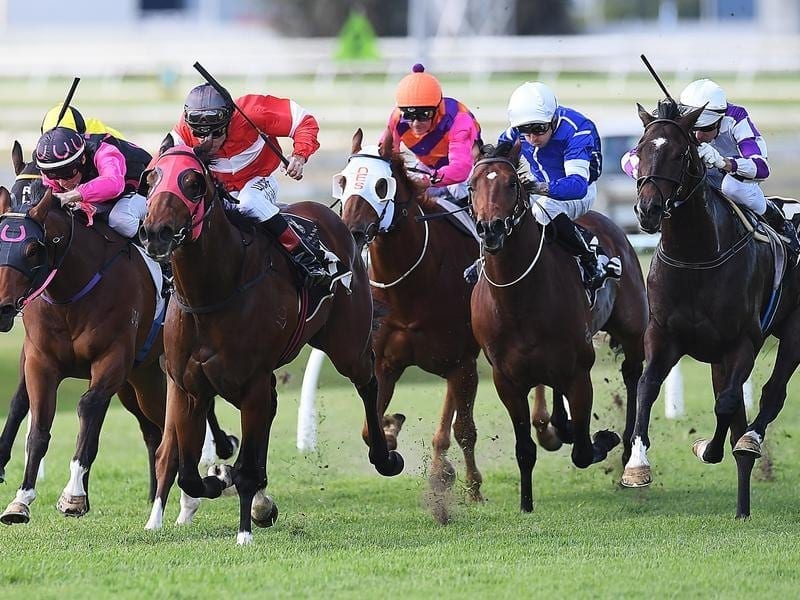 Ef Troop (far right) has been upset by Mittere (2nd left) in his return at Doomben.

Jockey Brad Stewart has questioned his own tactics after odds-on favourite Ef Troop was beaten into second place on his return at Doomben.

“If you swap the barriers I win. The winner has come from barrier two and got the run of the race,” Stewart said.

“But for all that maybe I should have been more aggressive and put the foot to the floor and tried to lead. But there was no sure thing I would have not still been caught deep and still got beaten.”

Trainer Tony Gollan still has a southern trip in mind for Ef Troop and will make a decision in a few days.

“You can’t win races sitting deep like that under big weights,” he said.

Winning trainer Dan Bougoure was humble in victory but added Mittere was a lot better horse than his price suggested.

“The second horse was very unlucky. But barriers make a big difference and my horse is very fit and race hardened,” Bougoure said.

Mittere cost $120,000 as a yearling and is a half brother to the Bougoure-trained Snitzel’s Joy.

“He has some stout breeding and I think he can go on to win more from here,” Bougoure said.