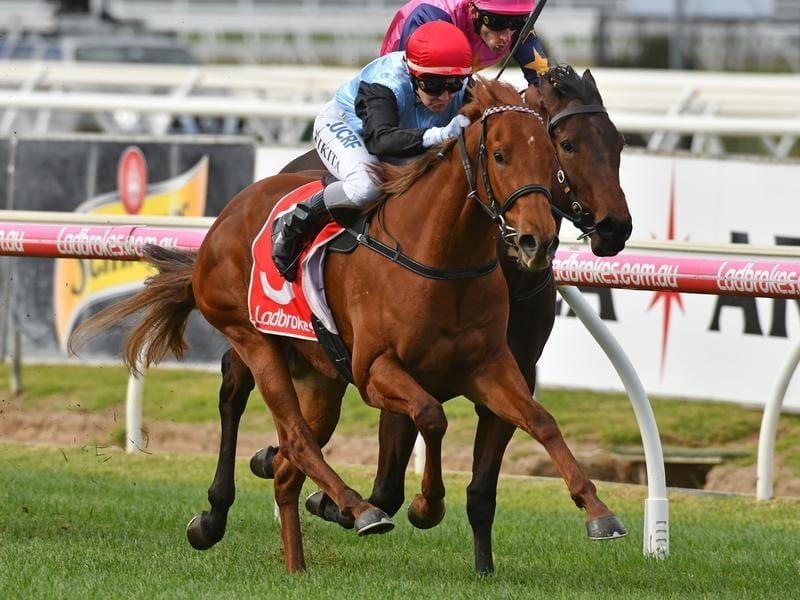 Star Surprise has made it two wins from three starts with a determined victory at Caulfield.

Two-year-old Star Surprise is only small in stature but the gelding has shown he has his fair share of ability with a determined victory at Caulfield.

Star Surprise finished second on debut at Sale to the Danny O’Brien-trained Can’t Be Done in May before breaking his maiden at his second start at Echuca last month.

The gelding clashed for a second time with Can’t Be Done in Saturday’s Ladbrokes Odds Boost Handicap (1000m) and lived up to trainer Mike Moroney and jockey Nikita Beriman’s expectations, getting the better of the $3.50 favourite to beat him by three-quarters of a length.

Lady Loire was another 1-1/4-lengths away third.

“He should have probably won three out of three.”

Moroney said Star Surprise had to give Can’t Be Done a big start on debut after being slow away and becoming unbalanced around the home turn.

And he met the favourite 3kg better at the weights on Saturday when sent out an $11 chance.

“I know the winner won easily that day but he would have made it interesting if he had jumped away and did everything right,” Moroney said.

“With weights and measures, if you believe in that, he was in well today.”

Star Surprise was bought for only $8000 as a yearling and Moroney now plans to press on with the gelding into the early spring for sprint races for three-year-olds.

“We tried to get him ready to the Magic Millions (in January) but he came to us unbroken at the end of June (last year) from the sale. I tried to push him through but he went shin sore and we had to stop.

“He’s got a lot of ability and he tries hard.”

Beriman said she was confident going into the race after riding Star Surprise in work during the week.