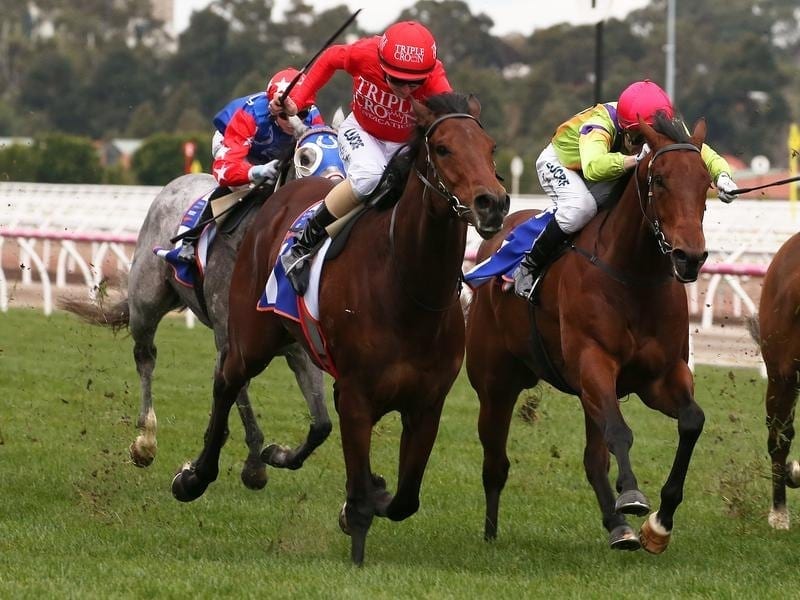 Sydney sprinter Brave Song (L) will try to extend a Melbourne campaign when he runs at Flemington.

The spring carnival prospects of Brave Song will be put to the test in the Group Three Aurie’s Star Handicap at Flemington.

Brave Song faces a field on Saturday which includes a Newmarket Handicap runner-up Voodoo Lad, Group One winner I Am A Star, imports Home Of The Brave and Poetic Dream, and Group Two winner Rich Charm.

Brave Song placed at Group Three level last preparation and makes his first appearance as a four-year-old after resuming from a spell with a narrow win in a late-season race for three-year-olds at Flemington on July 21.

“It’s a bit of a look to see where we’re at,” co-trainer Peter Snowden said.

Snowden believes Brave Song has the ability and turn of foot to be capable of making the step up.

“But whether he does is two different things,” he said.

“He met a good horse in Kementari and wasn’t up to that grade last preparation, but we’ve gelded him since then and I think he’s come on a bit more, mentally, since then.

“So we’ll get a good guide after Saturday and know a bit more about him.

“There’s more options for him in Melbourne at the moment than there are in Sydney.

“If he measures up he’ll stay for another one or two runs.”

Despite Brave Song winning at Flemington last month over 1100m when he was left exposed for much of the race, Snowden is adamant the gelding is much more effective when he can get cover and relax.

He hopes that scenario plays out in Saturday’s 1200m straight race, in which Brave Song has the limit weight of 54kg in a field of 10.

“He began well and was right on the speed from the start.

“I expect in a better class field they’ll go quicker earlier and he should be able to get into a more favourable spot, just get off the speed a bit more.

“He’ll relax better and he’ll have a better turn of foot.”