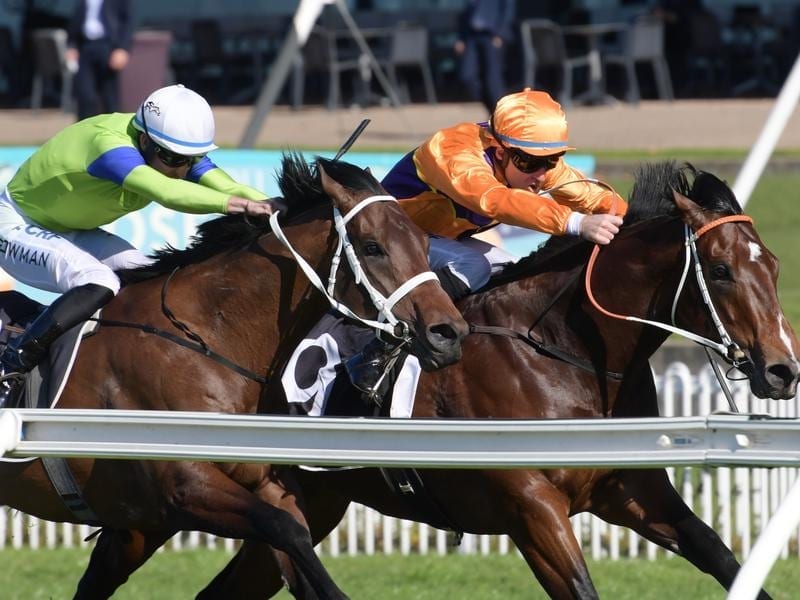 High-priced yearling buy Spend (right) has made a winning debut at Rosehill for Hawkes Racing.

Expensive colt Spend has had to work hard but managed to get the job done on his first visit to the races at Rosehill.

A $1.55 million yearling trained by Hawkes Racing for Spendthrift, Spend came to Saturday’s Everest Carnival Handicap (1100m) as favourite, having been backed in from $6 on TAB fixed odds on Wednesday to start at $2.90.

Punters saw True Detective ($3.40) as the only threat and that was how it turned out with the pair dominating the final stages of the race.

Spend loomed up to True Detective, who had the benefit of a win in February on his record, and looked as if he would stroll past.

Tommy Berry had to get busy to get him to the line a short head in front of his rival with Belitsa ($8) doing best of the rest, 4-1/4 lengths away third.

“He didn’t seem to like the (heavy) track at all,” co-trainer Michael Hawkes said.

“It was his first day at the races and he missed a trial because they were washed out.

“He showed the signs of a good horse.

“It’s upwards and onwards with him.”

Berry has also had a bit to do with the Chris Waller-trained True Detective and said the distance was more of a concern than the rain-affected ground.

“He handled the track fine but I think the 1100 metres was too sharp for him,” Berry said.

“At the 600 he dropped the bit and was struggling to go with the speed of the race.

“I thought we were in a bit of trouble there because it takes a good horse to go from not travelling at all to pick them up and put them away.

“He got tired late so there’s improvement to come and he’ll be better suited up over further.”