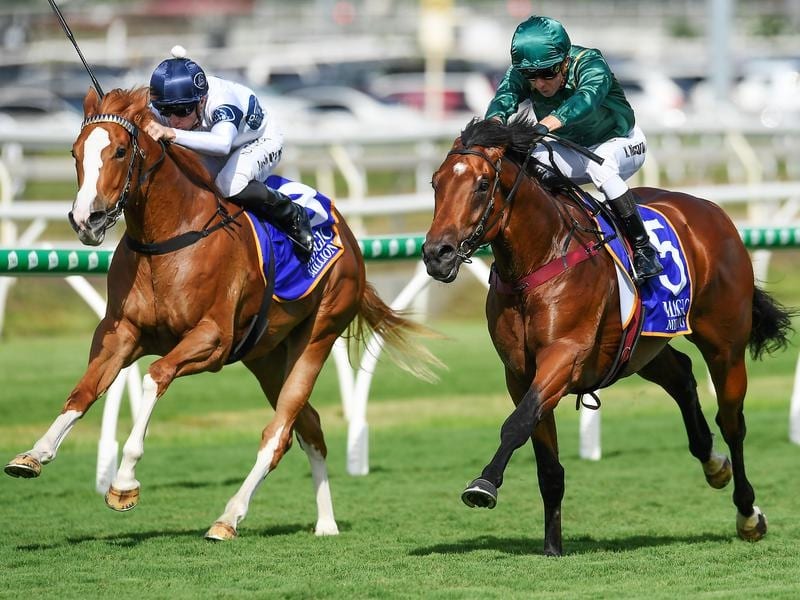 The powerful Peter and Paul Snowden training partnership took a firm grip on the Magic Millions 2YO Classic when another of their horses, King’s Legacy, qualified for the race at Eagle Farm in Saturday.

The Snowdens now have Aim, Sanscy, Stellar Pauline, Strike, Nitrous and King’s Legacy in the top 18 qualifiers for the Classic.

Peter Snowden said the stable had not finalised its Classic starters but Strike was unlikely to run.

“On the other hand I would be surprised if King’s Legacy doesn’t head there,” Peter Snowden said.

“I will have to talk to the owners but it is a $2 million race.”

“He hadn’t really showed that much pace in his races. But I thought when it was that close today he would need to do something special to win,” Snowden said.

“We can give him a nice lead up now without having to worry about qualifying.”

Asked which was the best of his Millions chances Snowden was non committal.

“Let’s just get them to the race and then we can sort it out from there,” he said.

King’s Legacy, a Redoute’s Choice colt, cost $1.4 million as a yearling and is headed to a stud career.

He is raced by a James Herron syndicate who also had the 2016 Millions Classic winner Capitalist who has his first crop at the yearling sales this season.

Trainer Mark Newnham thought Every Rose did a good job and it would help her be spot on for the Millions.

Jockey Josh Parr said Every Rose had set a solid pace and her effort was good to battle on so well.

Damien Oliver also felt his mount Euphoric Summer would be improved for the Millions.

Glen Boss said the $2.70 equal favourite Blondeau had got well back and was never a winning chance before finishing fourth.