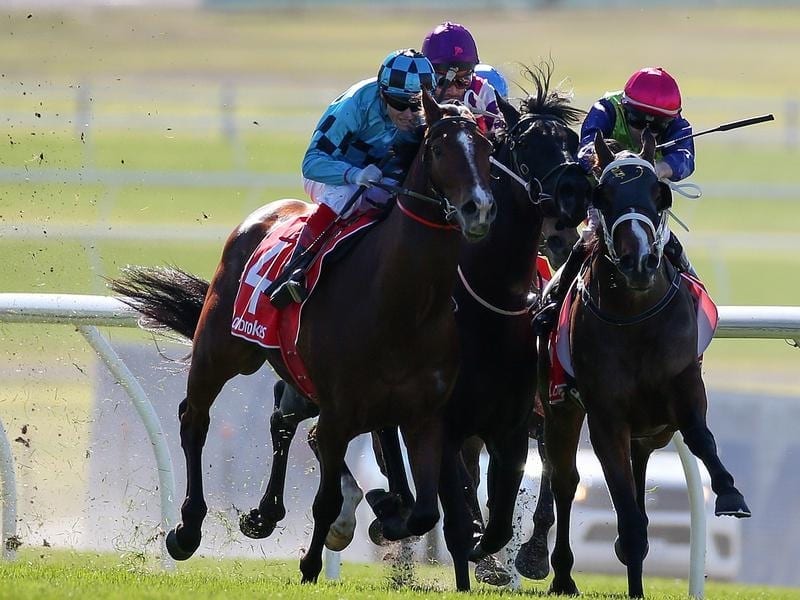 Smart Elissim (outside) will be on trial for the Magic Millions Guineas when he runs at The Valley.

A fresh Smart Elissim gets the chance to showcase his Magic Millions Guineas credentials when he returns from a let-up at Moonee Valley.

Big race ambitions during the spring carnival did not eventuate for Smart Elissim who had been in Sydney with a view to earning a crack at the Group One Golden Rose in September.

The three-year-old won his first two starts in Victoria before heading north where he finished third in the Group Three Up And Coming Stakes (1200m) in August.

Smart Elissim was on trial for a Golden Rose start in the Group Two Run To The Rose at his next outing but failed on a heavy track in the 1200m-race at Rosehill on September 8 before returning to Melbourne where he finished fifth of six in the Blue Sapphire Stakes the following month.

Co-trainer Ben Hayes is confident Smart Elissim has benefited from a freshen-up since the Blue Sapphire ahead of Saturday’s Santa’s Workshop @ The Valley Handicap (1200m).

“We’ve freshened him and I think it’s been really good for him,” Hayes said.

“He seems to be going really well and he is looking fantastic.

“He had a really nice trial last week and we’re aiming him towards the Magic Millions Guineas.

“I think he’s ready to run a big race.

“We’ve always had a high opinion of him. Hopefully this preparation he can show us he’s got ability.”

Apprentice Lachlan King will claim 3kg off Smart Ellisim’s 60kg in the benchmark-70 race for three-year-olds for which the gelding was the $2.40 favourite on Thursday in the field of seven.

Smart Elissim is at $26 in the TAB’s first markets on the Magic Millions Guineas at the Gold Coast on January 12 with dual Group One placegetter Lean Mean Machine the $8 favourite.

The Lindsay Park stable is set to be represented in six of the nine races on Saturday including in the BuildSafe Plate (1000m) for two-year-olds in which stablemates Floreat Pica, Favourite Things and Namimo make their debuts.

“They are all nice horses that we think could be Blue Diamond potential,” Hayes said.

An early market has Namimo as the $3.60 favourite.