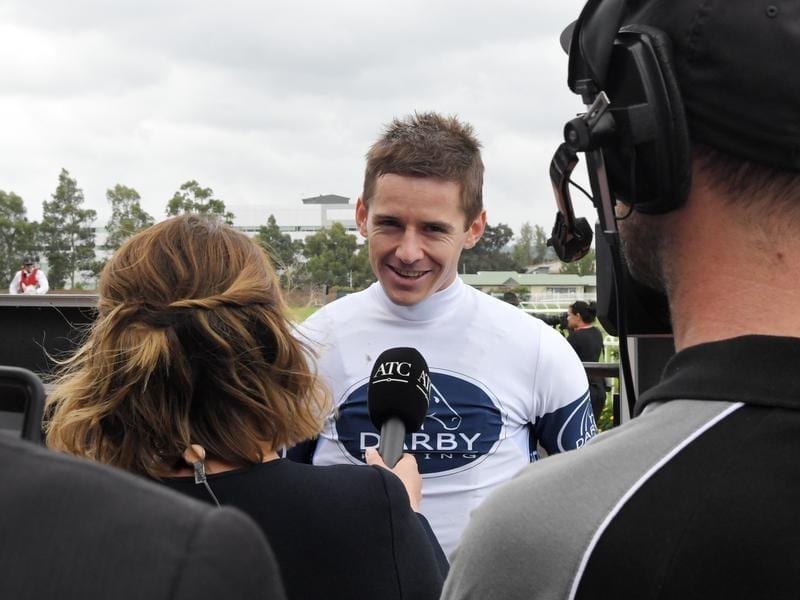 Jockey Jason Collett’s best chance to snare a first G1 win could be Time To Reign in the Slipper.

Jason Collett will traverse two states this weekend in search of an elusive Group One win and his best chance looks to come in one of the country’s biggest races.

The in-form jockey will be in Melbourne on Friday night to partner Spright in the William Reid Stakes before returning to Sydney for the Golden Slipper day meeting at Rosehill.

He has two Group One rides on Saturday – the Australian Derby-bound Costello in the Rosehill Guineas (2000m) and one-time favourite Time To Reign in the $3.5 million Golden Slipper (1200m).

Collett has come close to breaking his big race maiden several times and accrued a collection of Group One placings along the way.

But the laid-back jockey remains philosophical about finally getting his moment in the sun.

“It’s a goal, but when it comes, it comes,” Collett said

“They’re both in good races. Costello is working towards the Derby so it would be good to see him hit the line strongly.

“Obviously, Time To Reign for the Slipper, I rode him with a sit the other day and it didn’t work out so we’ll be more positive and aggressive on him on Saturday.”

With Costello up against brilliant colt The Autumn Sun in the Guineas and Spright facing off against Newmarket Handicap winner Sunlight at Moonee Valley, Time To Reign is shaping as the jockey’s best chance to break his run of Group One outs this weekend.

The Gary Portelli-trained colt has won three of his five starts, the highlight his Silver Slipper Stakes triumph over then-Golden Slipper favourite Tassort who subsequently had a setback and was spelled.

But Time To Reign’s disappointing last-start sixth to Yes Yes Yes in the Todman Stakes led to him losing favour with punters, although Collett remains steadfast.

The hoop firmly believes connections have learned from past mistakes with the horse who he regards as a serious contender in the juvenile showpiece.

“I think we’re going into the race with the right race plan and I feel like, from these three starts we’ve had, we’ve got to know him very well,” Collett said.

“He just has to perform like he did two starts ago and he’s a very good chance.”

Time To Reign tuned up for the Slipper with a solo gallop at Warwick Farm on Tuesday and Collett gave the work his tick of approval.

A half-brother to trainer 2017 Golden Slipper heroine She Will Reign, also trained by Portelli, Time To Reign is $13 in an open market.