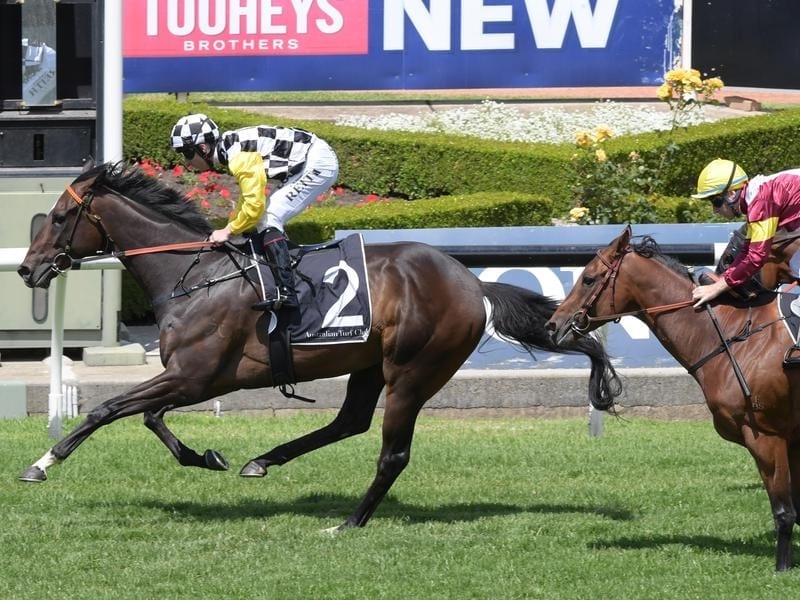 Sky Boy has clocked up a fourth straight victory with a win in the Membership Handicap at Rosehill.

Sky Boy has further strengthened his claims for the Group Two Villiers Stakes with victory at Rosehill giving him a fourth successive win this campaign.

Trained by Anthony and Edward Cummings, Sky Boy, the $3.40 favourite in Saturday’s 1800m benchmark 88-race, travelled well just behind the leaders until the turn.

Christian Reith pushed him out on the turn to launch so as to avoid getting stuck in a pocket and Sky Boy swept to the front and sustained his run to beat Fierce Impact ($5) by a length.

Sky Boy’s winning run started over 1550m on the Kensington track at Randwick and was followed by two starts over 2000m before Saturday’s 1800m race.

Anthony Cummings says the gelding will have no trouble coming back to the 1600m of the Villiers, Sydney’s summer showpiece on December 15 at Randwick.

“He has always been good from Day One but needed to mature physically and mentally,” Cummings said.

“I’ve got not doubt he can get to the top level and by spring next year be a serious contender for all the big races.”

The top level is likely to come around sooner than the spring with the winner of the Villiers gaining an automatic start in the Doncaster Mile in April which is the plan for Sky Boy.

‘That’s what we hope will happen anyway,” Cummings said.

“If he wins the Villiers, then we will work out his path to the Doncaster.”

Reith said Saturday’s win was better than his last as he continued to improve.

“That was a better win today,” he said.

“He was tough. I got him out when I did because I didn’t want to be stuck there and he really attacked the line.”

The Malaysian businessman had a long and successful interest in Australian racing with Cummings’ father Bart who secured four of his 12 Melbourne Cups with Dato Tan’s horses – Think Big (1974 and 75) Saintly (1996) and Viewed (2008).

Dato Tan bred Sky Boy at his Think Big Stud in the NSW Southern Highlands in a mating with Pendragon and Zazabelle who ran third in the 1999 Melbourne Cup won by stablemate Rogan Josh.

The partnership between Anthony Cummings and his son Edward will be dissolved in the new year with the younger Cummings keen to make his own mark.

No matter where Edward sets up, Sky Boy will be staying where he is with Anthony at Randwick.

“Sky Boy will be at Leilani Lodge where both his parents were trained,” Duncan Ramage, Dato Tan’s business manager, said.