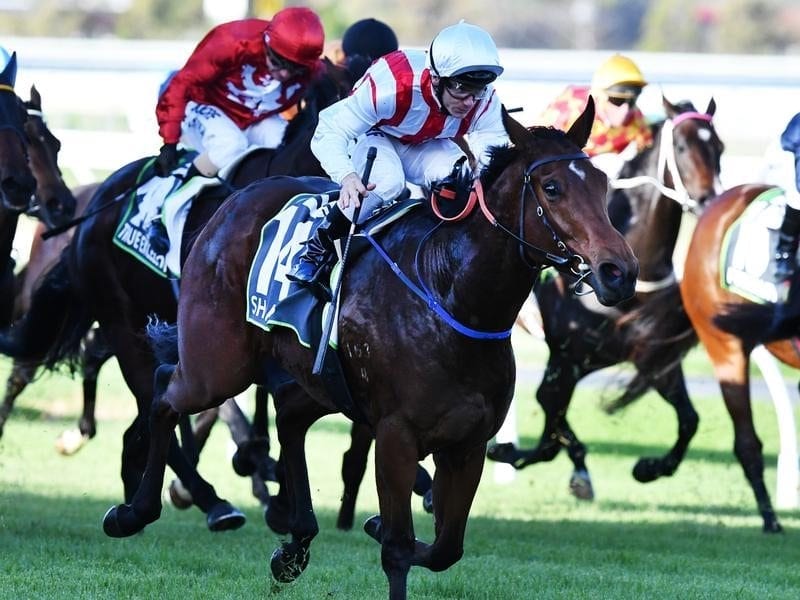 Shoals has added the Group One Robert Sangster Stakes at Morphettville to her elite-level wins.

Shoals has stamped herself the best three-year-old filly in the country after Group One wins in three states, with her latest in South Australia in the Robert Sangster Stakes at Morphettville.

The winner of the Myer Classic in Melbourne and the Surround Stakes in Sydney, Shoals added Saturday’s Sangster (1200m) after overcoming a scare from an inoculation in preparation for a tilt at Royal Ascot.

The trip to England is back on the agenda after her win for trainer Anthony Freedman and owners Jonathan Munz and John Messara.

She was a lucky pick-up ride for Tim Clark with Mark Zahra struggling to get to 55kg after battling flu all week.

“Her work on Tuesday was as good as before she won the Myer,” Freedman said.

“She is an outstanding filly. She has won three Group Ones from 10 starts and was dominant today in a very good race.

“She has gone up a couple of levels and we will give Royal Ascot a lot of thought.

“I will have to speak to the two Johns – Munz and Messara.

“If the decision is made to go then she will probably fly out at the end of May.”

Clark went to Adelaide to ride the Gai Waterhouse and Adrian Bott-trained Savapinski in the Group Two Queen Of The South Stakes in which she finished fourth.

“It’s a funny game. Sometimes you have a bit of luck at someone else’s expense,” he said.

“She began really well. Anthony asked me to have her midfield and I was able to slot into a good spot.

“When I asked her to click up into the bridle she was there for me. She was dominant.

“I’m glad I made the decision to come over to ride the other filly.”