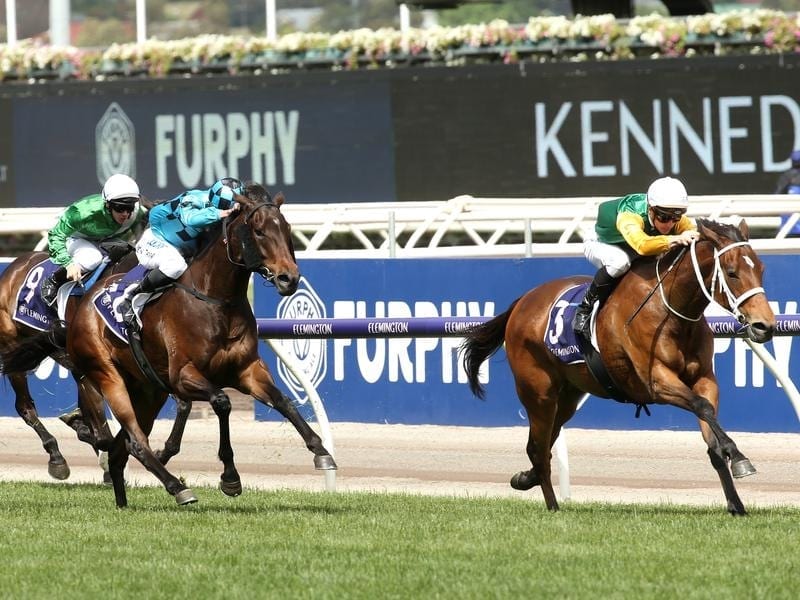 Shillelagh (r) will be aiming for a second Group One win at the Cup carnival in the Mackinnon.

Armed with an enviable Flemington record, Shillelagh will venture into uncharted territory when she bids for a Melbourne Cup carnival Group One double in the Mackinnon Stakes.

For the second year in a row the Chris Waller-trained mare raced to an impressive Group One win on the Victoria Derby day program at Flemington, this time in the Empire Rose Stakes (1600m) after taking out the Cantala Stakes in 2017.

Off the back of her strong Empire Rose win, Waller is sending Shillelagh into Saturday’s $2 million weight-for-age Mackinnon (2000m) seven days later when the seven-year-old will be tested beyond 1600m for the first time.

“This is her first time over 2000 metres but the family that she is from would suggest that it won’t be any issue and being well into her preparation it is the right time to be trying her.

“I am quietly confident that she will be hard to beat.”

Shillelagh has barrier six in the field of 10 which is headlined by two international visitors, Blair House and Irish Derby winner Latrobe who occupy the top two lines of betting at $2.15 and $5 respectively.

The Charlie Appleby-trained Blair House has been saved for the Mackinnon since his close second to subsequent Cox Plate runner-up Benbatl in the Group One Caulfield Stakes (2000m) four weeks ago.

Extra Brut is one of two three-year-olds in the race along with Mickey Blue Eyes who was 10th in the Derby after being held up for clear running early in the home straight.

Godolphin’s Australian trainer James Cummings saddles up last year’s third placegetter It’s Somewhat but it is another horse from the global racing operation – Blair House – who is the horse to beat.

“Blair House has got great form behind Benbatl. His Caulfield Stakes run was extremely impressive and he’s the fresh horse on the scene there,” Cummings said.

“And I know Charlie is extremely confident.

“We’re only an outside chance but It’s Somewhat has had some good form this preparation and back on top of the ground at Flemington where he’s run well in the past gives him an opportunity to run top three or top four. And we’d be delighted with that.”