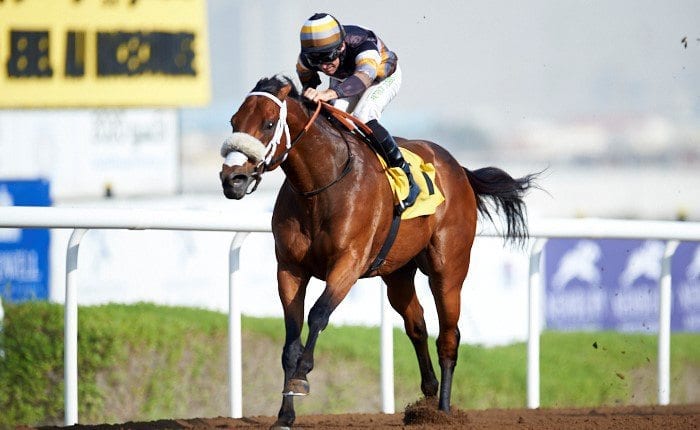 Friday’s Group 3 Jebel Ali Mile, the biggest race of the entire Jebel Ali season, was fought out by the same two horses as in 2017 when Forjatt, who became the third dual winner of the 1600m feature last year, denied Shamaal Nibras by just over a length.

This year, the pair had the race between themselves from about 400m out when Forjatt and Colm O’Donoghue gained the initiative from Farrier, winner of last year’s 1950m Listed Jebel Ali Stakes, with Pat Dobbs edging closer aboard Shamaal Nibras. Trained by Doug Watson, Shamaal Nibras was travelling ominously well and, at the 250m marker, Dobbs pounced, his mount quickened, and the pair gained their revenge.

The horse, owned by EERC (Emirates Entertainment Racing Club), was also second in this race in 2015 and Dobbs said: “Credit to Doug and his team who have done a great job to get the horse back fresh which was always the plan after the National Day Cup where he ran a bit flat. Obviously it was a good race and a good prize but this horse, on his day, is very good indeed and the strong gallop has really suited him. I was pretty confident we would get past Forjatt as I made ground on him smoothly and then my horse quickened well which he can do.”

EERC representative, Justin Byrne, added: “That is our biggest win as a syndicate and this horse deserved it; he has been placed in this race twice, as well as a Jebel Ali Stakes and a National Day Cup. We had a winner at Meydan at the Dubai World Cup Carnival last night with Los Barbados so it has been a great weekend.”

The opening 1800m handicap, the longest race on the card, was won in style by Interconnection who was sent straight to the front by Royston Ffrench and, basically, stayed there. Always travelling strongly, the pair had all six rivals in trouble early in the long straight and, with them not stopping, had the race won with no more than 200m left to run. Having his fifth local start and third on dirt, it was a first UAE victory to add to the four he registered in England, all on turf, when trained by Ed Vaughan. Ffrench said: “I was able to dictate matters out in front and race at the tempo I wanted. Then, when I asked him, he has dug deep and ran on strongly all the way to the finish.”

Jockey and trainer appeared set for a quick double when Untold Secret shot clear at halfway in the following 1600m handicap but they had no answer to the late challenge of Al Barez. Slowly into stride under Jim Crowley, riding for his main employer, HH Sheikh Hamdan bin Rashid Al Maktoum, the four-year-old slate grey son of Big Brown was given plenty of time to find his rhythm and settled in the middle of the 11 runners.

When Ffrench went for home on Untold Secret, Crowley was starting to ask for an effort and the pair made stealthy progress before unleashing a decisive challenge in the final 100m. Trained by Ahmad bin Harmash, Al Barez, on his seventh start, was doubling his career tally, winning for the first time since his debut, over 1400m as a juvenile, here at Jebel Ali, in November 2016.

Crowley said: “They went pretty quick up front and he is quite lazy so the first part of the race was pretty much about staying in touch. He won his debut as we know but did not show much at all after that but we had a clear run through horses today and he ran on well. The final furlong was the best I was ever travelling which would certainly suggest he will stay further.”

Bin Ghadayer did later complete a double when High On Life showed blistering early speed in a 1000m conditions race and just kept going, giving weight and an impressive beating to six rivals who just could not keep up with him. Under Xavier Ziani, deputising for Ffrench who was injured during the big race, High On Life never saw another rival and his jockey was able to ease him right down in the closing stages, so easily did he win. On his first outing since well beaten in the Group 1 Golden Shaheen, on Dubai World Cup night, he showed no signs of ring rustiness and could not have been more impressive.

A 1200m Jebel Ali winner last March, he has now registered both UAE victories on the course and Ziani said: “I have actually sat on the horse only once before, at home, because Royston always rides him but he had a nasty fall so was not available. It is not a nice way to get on a winner but Royston was straight on the phone to see how we did so, hopefully, the win has cheered him up!”

Trained by Helal Al Alawi, Shillong clearly has an affinity with the conditions at Jebel Ali where he has registered all four his career victories after his emphatic success in a 1200m handicap. Nearer last than first at the midway point, he suddenly loomed as a serious danger under Pat Cosgrave and, once they found a gap on the rail, they shot to the front 300m from home and the race was over as a contest. In doing so, he registered a fourth course and distance victory, a third this season.”

“I actually thought I should have won on him last time here over 1000m but things just did not pan out from a high draw. This 1200m is probably his optimum. The trick with him is you need to get him covered up and you know he will then pick up for you. They go fast here and then come back to you up the hill which really suits him.”

The concluding 1400m maiden attracted the afternoon’s biggest field, of 15, and produced a thrilling finish with Tadhg O’Shea driving Cherkes Pharoah to lead in the final strides for Ali Rashid Al Rayhi. They caught Imprison and Connor Beasley who themselves had only just gained the initiative from Dubawi’s Thunder and Cosgrave, like Beasley’s mount, trained by Rashed Bouresly. The winner was registering his first success at the seventh attempt, all this season having started the campaign unraced.