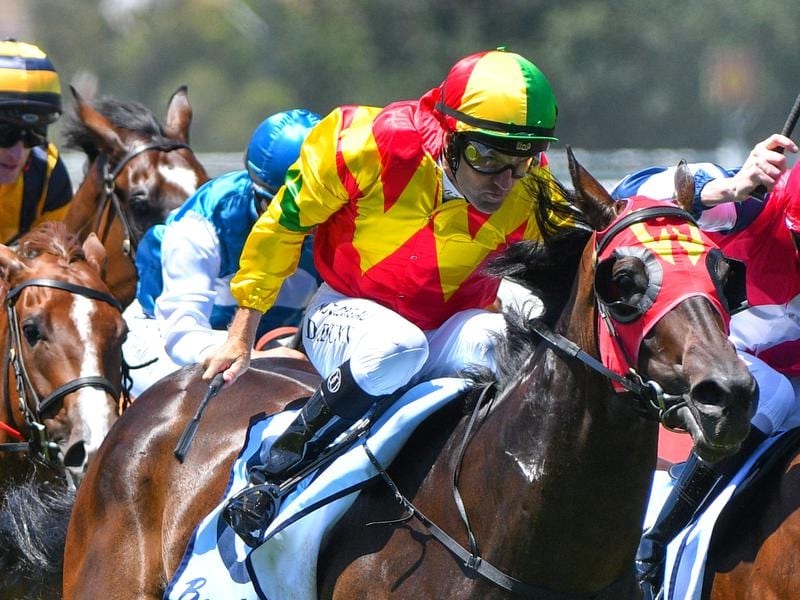 A spell has worked wonders for improving filly Score, a fast-finishing winner at Caulfield.

Trainer John Sadler believes Score is heading in the right direction after the three-year-old filly finished strongly at Caulfield to make it two-straight wins.

Sadler said the daughter of Written Tycoon’s temperament had improved from last season and the filly backed up a maiden win from Mornington on December 29 in her first start of her current campaign with a first city success on Saturday.

Having her sixth career start, Score ($4 fav) settled out the back of the field in Saturday’s Bass Strait Beef Plate (1100m) before overhauling her rivals in the straight under Dwayne Dunn to beat That Girl ($4.40) by a length, with La Zola ($10) another 1-1/2-lengths away third.

“I’ve always liked her but you like a lot of horses and some let you down,” Sadler said.

“Some of the Written Tycoon’s, obviously he’s a very good stallion, but they can get hot and in the latter half of her two-year-old career it looked like she might go the wrong way. But she had a good spell and this time she’s totally different.

“She has gone the right way and to just look at her out the back of the field today she was just flowing like a staying filly, not that I think she actually is.

“I just loved the way she quickened today.”

Sadler is likely to give the filly the chance to step up in grade again and hopes she can stretch out to at least 1400m and snare some black-type before the end of her three-year-old season.

“You’ve got to remember that the top-rated horse in today’s race was only rated 69, so it probably wasn’t a genuine 78 race,” Sadler said.

“But with a filly like this obviously you’re looking for black-type down the track. So we’ll just head her in that direction and hopefully she can get it as a three-year-old.”