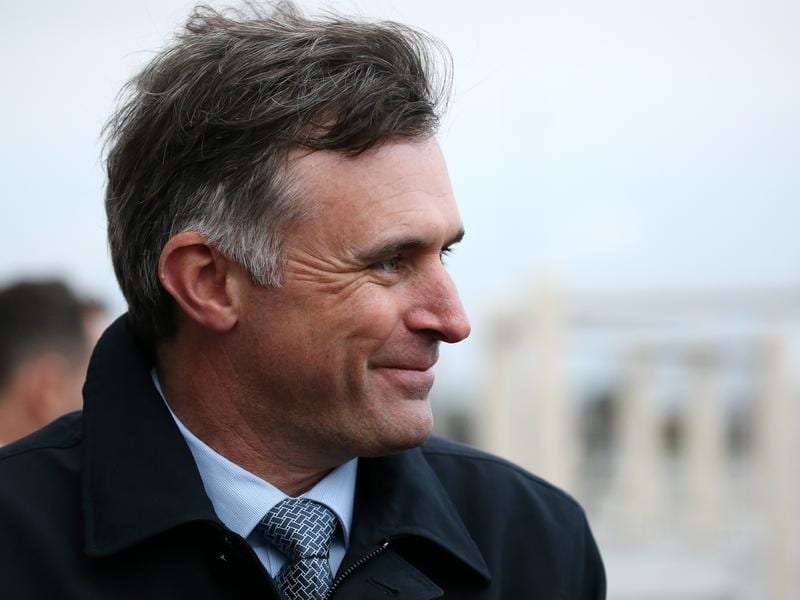 Trainer Tom Dabernig will saddle Queen Of Rocks at Sandown in a race to determine her future.

Stakes-placed Queen Of Rocks will begin her campaign at Sandown over 1200m with her performance to determine whether she is a Blue Diamond prospect.

Queen Of Rocks was third on debut in the Listed Debutant Stakes (1000m) at Caulfield in October and she resumes in a no-metropolitan win race for two-year-old fillies at Sandown on Monday.

“She got back and ran third on debut so 1200 metres should suit,” co-trainer Tom Dabernig said.

“We’ve put blinkers on her. She may be better for the run, fitness-wise, going in off one trial.

“Obviously this will be a bit of a decider on whether she’s possibly a Blue Diamond horse or not.

“She probably strikes me as one that might be more a 1400 metres or a mile filly.

“She will run well though. My expectations are I’d be disappointed if she wasn’t top three, but there is improvement in her coming out of the run.”

Queen Of Rocks, by Fastnet Rock out of multiple Group One placegetter Dowager Queen, was the $2.60 favourite on Sunday for Monday’s race with unraced Kartini Day at $4.

Dabernig said Queen Of Rocks was not quite as sharp as some other juveniles which is why they had elected to run her over 1200m first-up rather than in a shorter race.

“That’s the theory and we’ll know a bit more after it,” he said.

Dabernig said Maribyrnong Plate-winning colt Hard Landing was scheduled to kick off his Blue Diamond campaign in the colts and geldings Prelude on February 8, two weeks before the $1.5 million Blue Diamond (1200m).

Group Three-winning filly Aryaaf, who is high up in Blue Diamond betting at $11, could resume in Saturday’s Chairman’s Stakes (1000m) at Caulfield along with unraced colt Frederick The Dane.

Dabernig says the Lindsay Park team is still debating whether last-start Flemington winner Personal runs in the Prelude or goes straight to the Blue Diamond, the preferred option at this stage.