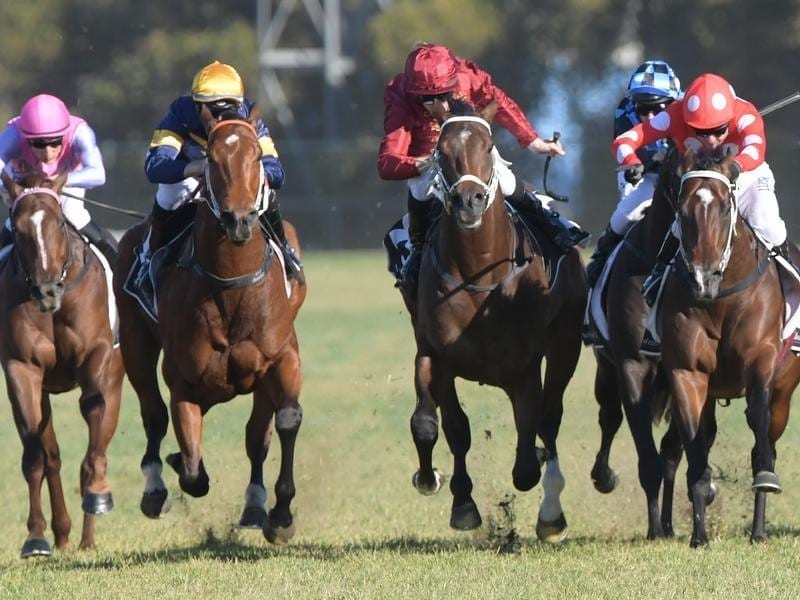 Sandbar (R) has overcome a wide barrier to win the Rosebud for emerging trainer Brad Widdup.

Brad Widdup’s second season in the Sydney training ranks has begun with a bang as stable star Sandbar picked off the first stakes race for three-year-olds.

Widdup, a long-time foreman for Darley and Godolphin, was persuaded to branch out on his own by high-profile owner Damion Flower, who has established Platinum Park at Hawkesbury.

While Widdup has some outside clients, the bulk of the horses in the stable are owned by Flower, including Sandbar, the winner of Saturday’s Listed Rosebud at Rosehill.

Ridden by Kerrin McEvoy, Sandbar ($6.50) had to work from the outside barrier under 59kg, with his jockey positioning better than midfield.

He dug in for the fight in the straight to beat Charge ($8) by a head, with race leader Golden Tycoon ($8) holding on gamely for third another half-neck away.

“I don’t know if he will go on to the Golden Rose over 1400 metres but that will be up to Brad.

“The San Domenico will be next and then the Run To The Rose and we’ll see after that.”

Widdup deflected praise, turning it instead to the colt and McEvoy.

“He is very honest and it was a great ride from Kerrin to get him across from the wide barrier.”

“He went into the fight when I asked him,” he said.

Flower raced Sandbar’s sire Snitzel, who is now Australia’s champion stallion and has owned many of his progeny.

He was also one of the first to make the three-year commitment to a slot in The Everest when the concept was unveiled last year.

Last year, Clearly Innocent raced in his name and in the $13 million event on October 13, English will be his representative.

“Sandbar could be my Everest horse next year,” Flower said.

“And there is the Coolmore Stud Stakes at Flemington this year for him.”

The Group One Coolmore Stud Stakes is over the 1200m-straight course at Flemington during the Melbourne Cup carnival.

Flower races Sandbar with a group of prominent owners, including Neil Werrett and John Singleton.

The colt was a stakes winner at two, taking out the Lonhro Plate before his close second to Written By in the Group Three Pago Pago Stakes and midfield finish in the Golden Slipper.