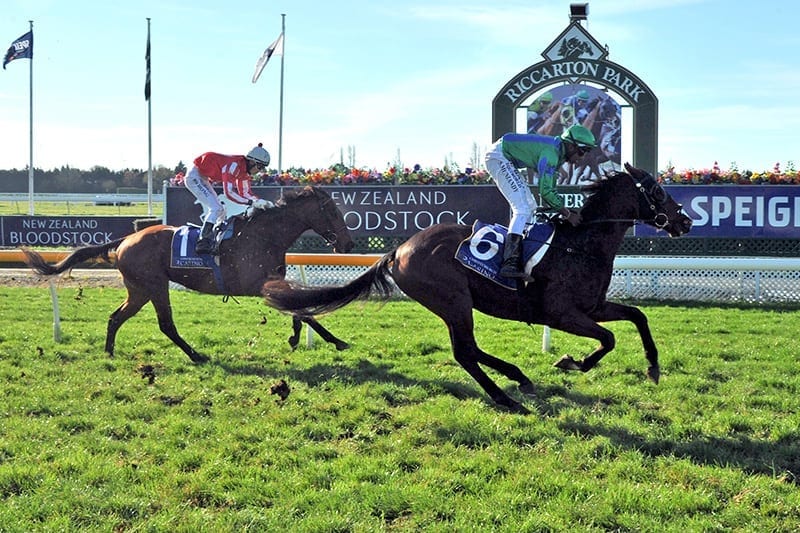 The Invercargill trainer said she felt empty after her Falkirk four-year-old was left stranded on the ballots for last Saturday’s Gr.3 Winter Cup (1600m) at Riccarton.

“It was a huge blow. I wouldn’t have come up here if I didn’t think he could win it,” Robinson said.

“He was very well for the race, probably as well as we’ve ever had him. The mile would have suited him perfectly.

“The 1400m on Saturday is a bit short for him but hopefully there’s a bit of rain forecast that will come tonight that will just slow the track down.”

A winner of four of his 16 starts, Finbarr finished fourth in Prom Queen’s Listed Champagne Stakes (1200m) as a two-year-old and was unplaced in last season’s Gr.1 New Zealand 2000 Guineas (1600m) but went on a winning run late last season with three straight wins at Wingatui, Riccarton and Ashburton before his last-start Oamaru Cup (1600m) third placing.

“It was a really good run at Oamaru. It was just a pity he got as far back as he did but he got home strongly and I was really pleased with him,” Robinson said.

“He’s got the visitor’s draw for the sprint but we’ll go forward. There’s no use being back and wide. There are some pretty good horses in there but he’s well and if he runs up to what he’s been doing, I’ll be happy.”

Robinson said Finbarr would spell after Saturday’s race with no set programme in place for his return.

“I’ll put him out and when he starts getting himself into trouble, it will be time to bring him back,” she said.

It’s been far from a futile trip north for Robinson however, with Finbarr’s stablemate Franconi causing a $56 upset in the final race last Saturday, form that has been franked with runner-up I’llhav Bubbles’ win at Riccarton on Wednesday.

“That made the trip worthwhile and he’s done really well since that race too. He’s come through it well, bucking and kicking, and hopefully he can run well again on Saturday too,” Robinson said.

Franconi contests Saturday’s Vernon & Vazey Premier 2000 with Lee Callaway picking up the mount and the ride on Finbarr too. – NZ Racing Desk