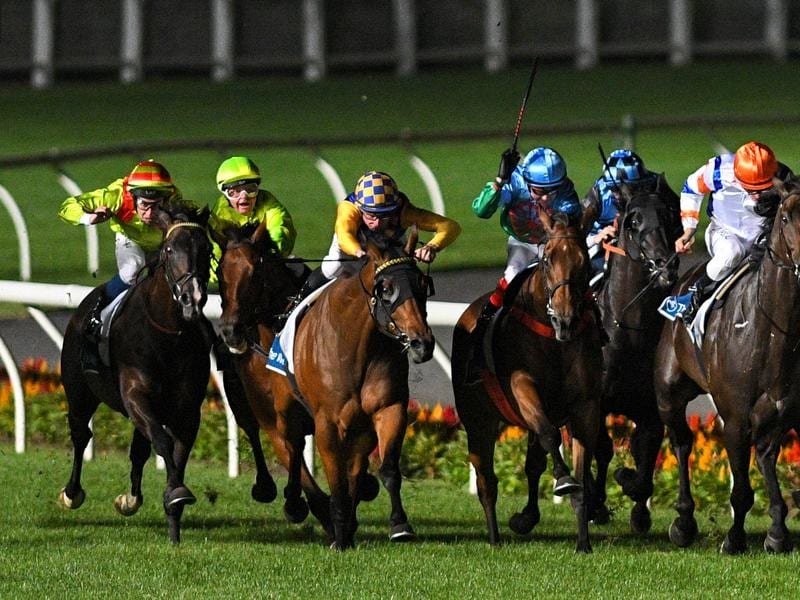 Stewards have taken no action after a fall in which Barend Vorster (lime) fell from Manuel.

Jockeys have escaped sanction after an inquiry into a fall in the Group Two Australia Stakes at The Valley that claimed the life of Group One winner Manuel and left jockey Barend Vorster with a fractured collarbone.

Vorster was riding the Tony and Calvin McEvoy-trained Manuel who fell in the straight in the Group Two race on January 24.

The gelding suffered catastrophic injures to his shoulder and knee and had to be euthanised.

They said there were three aspects to the fall which could not be attributed to any one rider.

“Ashlor shifted out and away from Scales Of Justice, there was a little shift from the outside by Begood Toya Mother and Barend Vorster attempted a run where there was a questionable amount of room,” chair Corrie Waller said.

“In the circumstances there was so much going on, so we took no action.”

But the panel told Vorster to ensure he had a full run available and also told Winks he should make more of an attempt to help runners to his inside when they were getting tight.

Vorster last week underwent surgery on the fractured collarbone which will keep him out of action for six weeks.