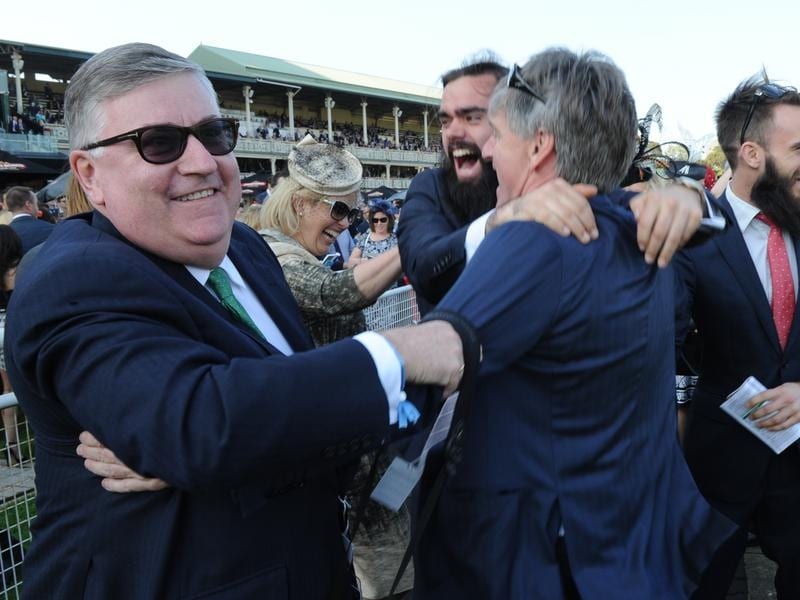 Richard Pegum (l) has secured a 25 per cent share in Cups contender Mustajeer via an online auction.

Prominent racehorse owner Richard Pegum has secured a 25 per cent share in leading Caulfield and Melbourne Cups contender Mustajeer for $320,000.

The share was offered by Irish operation Gaelic Bloodstock through Inglis Online with Pegum announced as the successful bidder on Wednesday.

Mustajeer, a last-start winner of the prestigious Ebor Handicap at York, is at $13 with the TAB for the Caulfield Cup and $18 for the Melbourne Cup.

He has been transferred to Newcastle trainer Kris Lees after Australian Bloodstock bought a controlling interest in the stayer.

Pegum said the opportunity to buy into a world-class stayer guaranteed a Caulfield Cup start on October 19 was too good to refuse.

“To purchase an in-form horse for a big race this close to the race, it’s very exciting,” Pegum said.

“I’ve been able to buy many horses before but this is one of the most well credentialled imports I’ve ever bought.”

“Thanks to Inglis for getting the job done,”he said.

“It’s been a seamless process as a vendor and we’re absolutely delighted with the result.

“I’d like to wish the new owner all the best in this new investment. Mustajeer has provided us with so many amazing memories and I sincerely hope he can come out and win the two big Cups in Australia in coming weeks so they can enjoy the thrills we have enjoyed with him.”

“We’re in with a live chance I feel. He’s coming out of the right form race and he’s settled into Australia quite well,” Lees said.

Mustajeer will leave Werribee on Saturday and have his final lead-up gallop on Tuesday at Caulfield where he will be based for the rest of his Melbourne campaign.

“This was new territory for thoroughbred sales in this part of the world, to be selling a quarter share in a genuine Caulfield and Melbourne Cups contender, in early October, online,” Melmeth said.