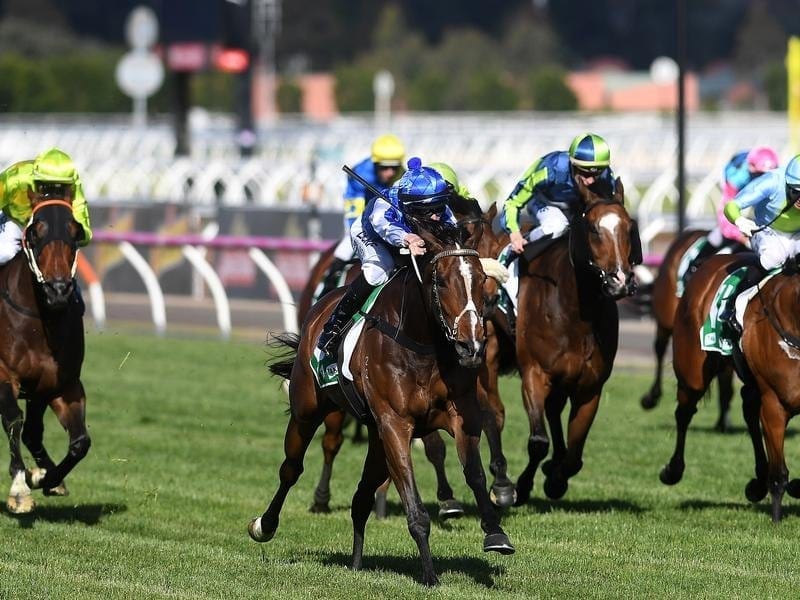 Rich Charm (blue) has been scratched from the Aurie’s Star at Flemington after cutting a leg.

Trainer Udyta Clarke has been forced to scratch Rich Charm from his return run at Flemington after the gelding cut a hind leg.

Rich Charm has been given a course of antibiotics which has ruled him out of Saturday’s Group Three Aurie’s Star Handicap.

“He kicked himself on the hind leg and he had to have antibiotics and because there’s a seven-day stand-down, I can’t race him,” Clarke said.

“I’m so paranoid with him.

“He kicked himself right on the hock and you just can’t take a chance with that.”

Clarke does not expect the cut to hinder Rich Charm but has not yet decided when he will return.

Rich Charm has continued working in a self-made water-walker at Clarke’s property.

“I’ve got a good pool here that I’ve pumped out and made into a water-walker.

“He’s able to walk around there and keep himself right but I’m not making any plans until I see what he’s like in a few days time.

Clarke said Rich Charm had enjoyed a trouble-free preparation and was ready to go before the setback.

“These things happen for a reason, but I go without sleep,” she said.

“Whenever they’re sick I always stay with them.

“They’re part of the family and I’m very tired today.”

A Group Two winner over the straight 1200m-course last November, Rich Charm last raced in May when he finished fourth in the Listed Straight Six at Flemington.