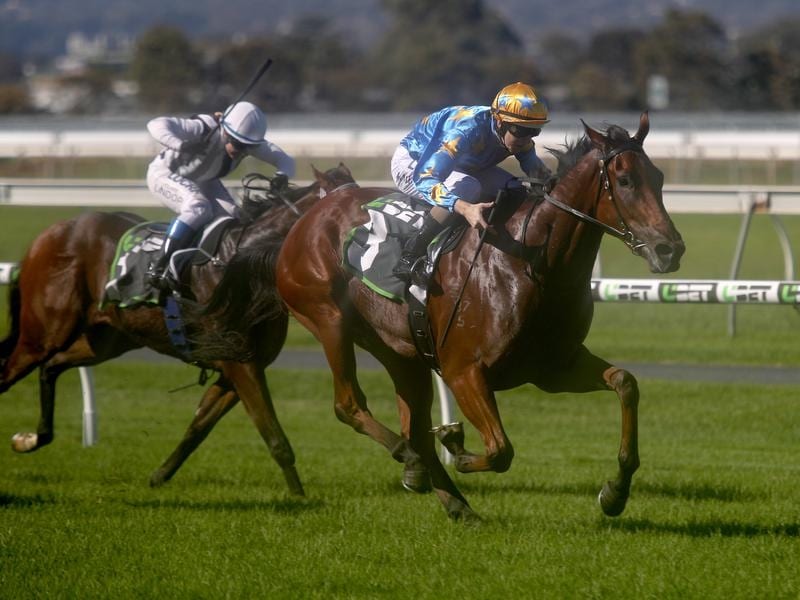 Marcel From Madrid will have his first start for Victorian country trainer Paul Preusker at Sandown.

Country trainer Paul Preusker has worked on getting recent acquisition Marcel From Madrid to switch off but will not know if he has been successful until the gelding races at Sandown.

Having started his career with Mathew Ellerton and Simon Zahra at Flemington, Marcel From Madrid was transferred to Preusker’s Horsham stable after running fifth at Moonee Valley in March.

Marcel From Madrid won on debut at Benalla last year before going on to victory in the Group Three National Stakes at Morphettville on a soft track.

On Saturday Marcel Madrid runs in the Ladbrokes Cash Out Handicap (1200m), providing the track is not too wet.

The track was in the soft range on Wednesday with rain falling in Melbourne.

“We’d like to see him on top of the ground rather than on a wet track so I’ll play it a little bit by ear,” Preusker said.

“We will either run him Saturday or wait for the following week at Flemington.

“I’ve trialled him on the heavy and I don’t think that’s his go.”

Preusker said Marcel From Madrid came to his stable a hot horse who needed calming.

Work on the roads and time spent in the paddock has enabled the gelding to switch off.

While the early signs have been encouraging, Preusker says he will not fully know until the gelding steps out on race day.

“Some horses improve, some go backwards and I guess until he races we’re not going to know if it’s been a plus,” Preusker said.

“For the horse, you’re better off seeing them happy and relaxed.”

In preparation for Sandown, Preusker has given the gelding jump-outs at his local track at Horsham and travelled him to Hamilton with the trainer liking what he’s seen.