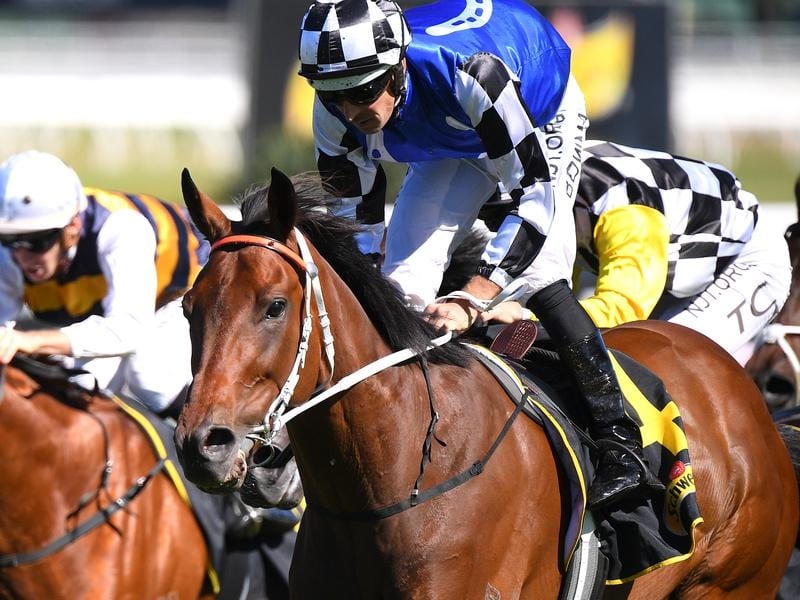 Raheen House surged late under Hugh Bowman to reel in Carif and win the Chairman’s Quality.

European import Raheen House has relished a distance rise to emerge as a serious Sydney Cup contender with a strong win in a key lead-up race at Randwick.

A two-time stakes winner over staying trips in England, Raheen House had not managed a top-five finish in four previous Australian runs.

But up to 2600m in Saturday’s Chairman’s Quality, the Kris Lees-trained gelding turned that form around.

Settling worse than midfield in a genuinely run race, Raheen House ($17) surged late under Hugh Bowman to reel in $5 favourite Carif and score by 1-1/4 lengths.

Mirage Dancer ($15) was strong to the line, another long neck in arrears.

Lees said the six-year-old took time to adjust to Australian racing but he had been pleased with his two campaign runs leading into Saturday’s Chairman’s Quality.

“He came down for the carnival but he probably wasn’t himself in the spring on a couple of firm tracks, which didn’t suit him,” Lees said.

“I’m really happy with how he’s settled in. His two lead up runs were improving with each outing and he got conditions to suit and a lovely ride by Hugh.

“He was very strong. It’s a nice set up for next week’s Sydney Cup.”

Lees confirmed Raheen House would back up in next weekend’s 3200m staying test, joining stablemates Mustajeer and possibly Saunter Boy in the race.

Bowman believes Raheen House is open to further improvement and says while he travelled keenly in the run, the blustery conditions might be to blame.

“I would have loved for him to relax a bit better for me during the race,” Bowman said.

“For a European stayer, I thought he just over-travelled a bit. That might have been the wind, it’s really hitting you down the back straight, especially when you’re on the rail like I was.

“But he has certainly got upside.”

Raheen House has firmed from $15 into $8 for the Sydney Cup, with TAB joining Carif on the third line of betting behind Young Rascal and Mustajeer.