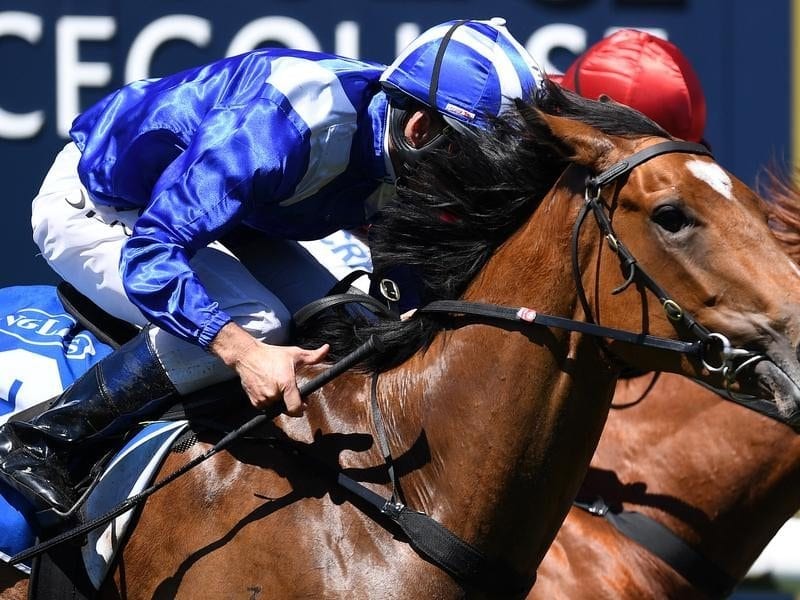 Damien Oliver rides Qafila (left) to victory in the Debutant Stakes at Caulfield.

Qafila has continued a strong start to this season’s juvenile racing for the Lindsay Park stable with her victory in the Listed Debutant Stakes at Caulfield.

The filly’s narrow but impressive win in Saturday’s 1000m race came a week after stablemate Nomothaj took out Melbourne’s first race of the season for two-year-olds, the Listed Maribyrnong Trial Stakes.

Qafila, like Nomothaj, is owned by Shadwell Stud and was bought from this year’s Magic Millions yearling sale at the Gold Coast.

Qafila ($5) didn’t muster a lot of early speed in her first race appearance but made ground on the inside under jockey Damien Oliver before angling out into the clear.

The Tony McEvoy-trained Sacred Sword ($6.50) looked like he might have opened up a winning margin passing the 100m but Qafila overhauled him and win by a neck, with three-quarters of a length to Encryption ($8) third.

“She was prone to doing a little bit wrong at home and in her jump-out down the straight at Flemington she wanted to hang in under pressure,” Dabernig said.

“Today we were a bit further back than what we thought and Damien made that weaving run. When he got her into the clear she really was strong late.”

Dabernig said there were two different race options for the filly during the Melbourne Cup carnival at Flemington next month or she could be saved and aimed at the rich Magic Millions Classic at the Gold Coast in January.